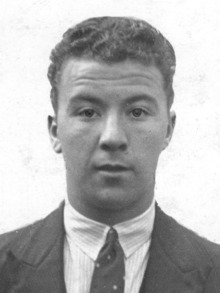 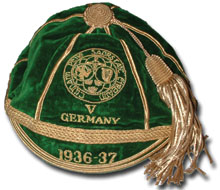 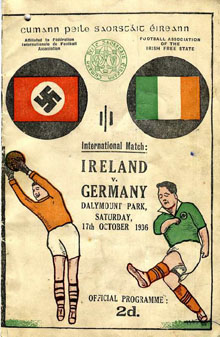 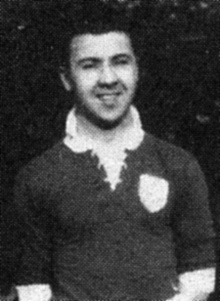 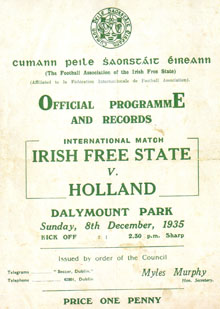 A prince of full backs, in his ten seasons with Dundalk Billy O’Neill won all the honours—11 International caps, 2 Inter League appearances, FAI and Inter City Cups. Only a League Championship medal eluded him—he had two of the runner-up variety. Not yet 20 years of age when he was first capped against Holland in December 1935, his final International appearance, a 1-1 draw against Germany in Bremen in May 1939, came in Ireland’s last pre-War game, when Billy was only 23 years old.

Born of a Railway family, his father had been the first secretary of the GNR AFC when it was founded in 1903. His first football success came with Brookville, winners of the Dundalk Junior League’s 2nd Division in 1933 and in the following year completed the Double of First Division League and Cup. For the 1934-35 season he was on Dundalk’s books and after appearing in a friendly against Sligo Rovers he appeared in the pre-season trial “bringing off some typical and daring tackles.”

His early season role was back up to the first team fullbacks, Welshmen Billy Powell and Len Richards, but after a spate of injuries and a number of departures, he was selected at centre forward for a mid-December League tie against Drumcondra at Tolka Park.

After scoring a hat trick in a 4-0 win he was kept at number nine for the rest of the season. Although he made only 20 appearances at centre forward, he was the club’s leading marksman with 16 goals and he scored in all four ties of the FAI Cup, collecting his first medal when Bohemians got the better of Dundalk by 4-3 in the final.

Starting the following year at right fullback, his impact was immediate—by December, two months short of his 20th birthday, he had received his first International cap. For the remainder of his career, with a couple of rare exceptions, he played at right fullback. He retained his place on the Irish International team for the following seven games until an injury knocked him out of a World Cup tie in October 1937 against Norway.

His 5 year full-back partnership with Tom Crawley, from 1938 to 1943, was crowned when the club achieved its first FAI Cup win in 1942 and made up for Billy’s two runner-up Cup final appearances—as well as the 1934 final against Bohemians he was also on the losing side in 1938 against St James’s Gate.

He had spent the last couple of months of the 1939-40 season with Glentoran after Dundalk had suffered a shock FAI Cup defeat that forced a mid season cut-back but after making 14 appearances with the Glens he refused very generous terms for the following season and returned to Dundalk. In his short period with Glentoran he collected a County Antrim Shield medal, defeating Linfield 4-0 in the final in a team that included his former Dundalk colleague Charlie Tizard and future Oriel Park teammates Johnny Lavery and Frank Grice.

He retired at the end of the 1943-44 season after making 330 first team appearances and following a benefit match against Belfast Celtic, he took up refereeing. Amongst League of Ireland players only Frank O’Neill (Shamrock Rovers) with 20 caps and Joe O’Reilly (St James’s Gate) with 18, have made more International appearances.

Employed at the GNR Works, he managed the Carriage Shop to success in the Inter Departmental Wilson Cup in 1954. On the closure of the Works he spent a number of years in the UK, returning home when S &S Engineering was set up on the site of the old Works.

Dundalk Democrat in the run-up to the 1935 FAI Cup final: “Billy O’Neill – Hardly known till he came from Brookville as a back. Did well. Dundalk were stuck for a centre forward and put Billy O’Neill there. Played so well we have all confidence in him as the best shot of the line. Young, strong and plucky with a turn of speed that bewilders opposition. Many of the Dublin backs think he is a torpedo”.