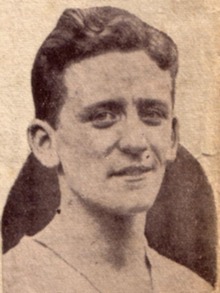 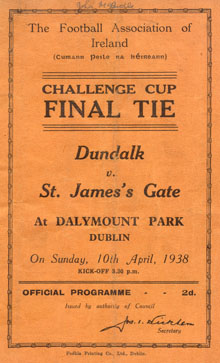 Jimmy McArdle was a member of a rare club as the possessor of both an All-Ireland Gaelic Football and FAI Cup medal. He had played a starring role in the County Louth victory of the 1936 All-Ireland Gaelic Minor Championship, capping a great campaign with two goals against Kerry in the final and in 1942 he was on Dundalk’s first FAI Cup-winning team.

He made his Dundalk FC debut with the reserves in November 1937, scoring a hat trick. He also scored on his League debut a few weeks later in the absence of centre-forward Alf Rigby. On Rigby’s return Jimmy moved to outside-right where he became a permanent fixture, ending his first season with an FAI Cup runner-up medal after Dundalk lost to St James’s Gate.

Moved to centre-forward in the following season, he shared the goal scoring duties with ‘Wagger’ Byrne and Joey Donnelly. For the rest of his career he invariably played at centre-forward or inside-right.

With a batch of new players on board, he was out of favour during the 1941-42 season, making only three appearances in the New Year, but he received a dramatic last minute call-up for the FAI Cup final against Cork when he added gold to his 1938 silver.

In the build-up to the final Dundalk selectors found themselves in a quandary regarding Bangor inside-forward Hugh Couser, who had been played illegally in the earlier rounds and the Dundalk camp were divided on whether to risk playing him in the final. Captain Joey Donnelly took the precaution of advicing McArdle to undertake extra training in readiness.

Another rumpus developed when the committee decided not to take a chance with Couser, opting for the 5ft 4inches Dickie Lunn but Donnelly intervened, pointing out that against the 6ft plus Florrie Burke of Cork, Lunn would stand no chance in the air. After another last minute selection committee, and in a final reshuffle Lunn was stood down and McArdle became the fourth Dundalk native on the winning team, joining Donnelly, Billy O’Neill and Tom Crawley.

He played for just one more season before retiring at the age of 25.

Bob Ferrier, the Motherwell and Scottish international player, was at Oriel Park with one of his directors, watching Billy O’Neill and afterwards commented to the man from the Democrat: “The best player on the pitch was Joey Donnelly and the most promising player on either side was the Dundalk centre-forward Jimmy McArdle.”