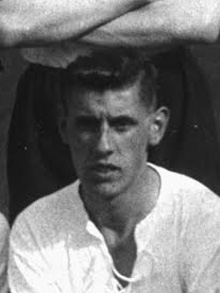 From his debut, in a 6-0 Leinster Cup win over Dolphin at the Athletic Grounds in September 1935, Billy McAfee had first call on Dundalk’s right half back spot for three seasons, picking up a pocketful of runner up honours, including the 1938 FAI Cup loss to St James’s Gate.

He worked in London for a couple of years, playing in the Athenian League, and on his return to Ireland in March 1940 he made a few appearances in the League. He was on the losing side in five cup finals—2 Leinster Cups, 2 Dublin City Cups, as well as the FAI Cup.

Before coming to Dundalk Billy had spent three seasons in the Irish League’s Intermediate Division with Belfast Celtic Reserves and later with Ballyclare Comrades.

A defensive wing-half, Billy’s goals were rarities, but he did have the honour of being the first Dundalk player to score at Oriel Park. In the opening day fixture against Cork on August 23rd 1936 Billy scored from twenty yards through a crowded goalmouth, drawing the following from the Dundalk Democrat ”It was a good goal, but there was a shade of luck about it; as an old friend of mine used to say, it might as well have gone up a tree.”