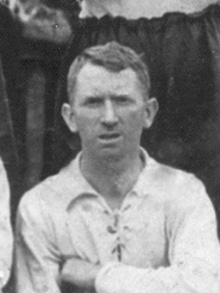 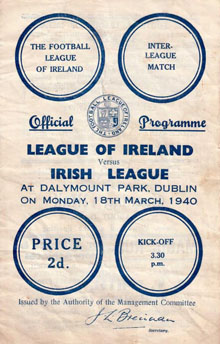 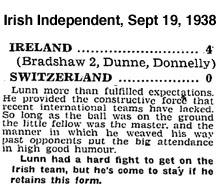 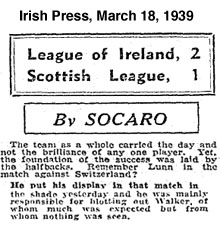 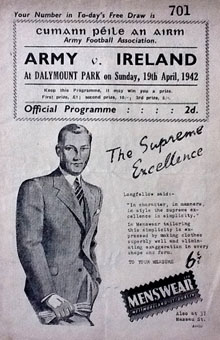 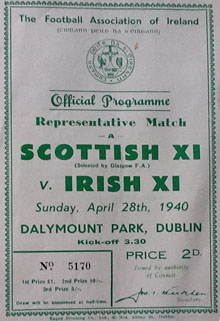 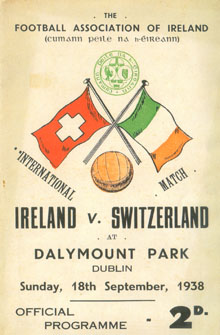 Just 5ft 4in and less than 8st. weight, the Lurgan-born Lunn was known as ‘The Mighty Atom’, and for 6 seasons he was at the heart of the Dundalk mid-field.

He arrived at Oriel Park in October 1937 taking over the left half-back spot from long time stalwart Henry Hurst and he was on the losing side in that season’s FAI Cup Final, when Dundalk went down to St James’s Gate by 2-1. The following autumn he was on the Irish International teams that defeated both Switzerland and Poland at Dalymount Park.

His eight representative appearances also included four League of Ireland caps and appearances with FAI XI selections. He was six times on the winning team. He also appeared on two FAI XI Selections—in April 1940 in an unofficial International against Scotland XI and in April 1942 in the first of the war-time series against the Irish Army.

And if Man of the Match awards had been the norm in the 1930s, his performances for Ireland in September 1938 4-0 victory over Switzerland and against the Scottish League in the League of Ireland’s 2-1 win at Dalymount Park on St Patrick’s Day 1939 would surely have merited such awards.

Injuries curtailed his appearances in the Cup Double-winning 1941-42 season, and although he was stripped and rubbed down for the FAI Cup final against Cork, he lost his place in a last minute selection change—it was reckoned he would have little chance of competing in the air against his opponent, the commanding 6-footer Florrie Burke.

With Frank Grice firmly entrenched in the left half slot, Dicky went to Brideville for the following year, but was back at Oriel Park in 1943-44. On the opening day of the season he collected his fifth runner-up honour with the club in the President’s Cup, losing 2-3 to Shamrock Rovers.

His last year’s appearances were mainly as standby for Grice, but by Cup time he had forced his way into the right half spot. After 6 seasons, Dicky got his benefit game at the end of May 1944 when a Dundalk selection played Shamrock Rovers. Released after his benefit he returned to Brideville for the 1944-45 season.

Before coming to Oriel Park he had played in the Irish League’s Intermediate section, first with Broadway United and later with Dunmurry, securing winner’s medals in the Steel and Son’s Cup and the Intermediate League. He had also accumulated runner up awards in the Lytttle and McElverry cups and in the 1933-34 year was selected on the Intermediate League team against the Scottish Central League.

A crowd favourite, his all-action 90-minute play turned many games around and his combination football with his left flank partners—Stanley Griffiths, ‘Wagger’ Byrne, Joey Donnelly, Charlie Reid, Johnny Lavery and Sam McCartney—would be remembered and recounted by supporters for many years afterwards.

In the spring of 1947 he returned to Oriel Park as coach to a Portadown Youth team, playing the Dundalk Minors. Short of a player he lined out himself, aged 38, at centre-half marking Joe Martin!!

“…A featherweight in appearance…5-feet nothing or thereabouts in his socks…all whipcord…his heart is the biggest part of him…tackles anything from Sacky Glen to Slieve Gullion…sound as the Rock of Gibralter when the going’s strong and his side is being pressed… and the greatest half-back of his size or weight in a big portion of the world.”

"The match was won and lost at wing half-back. Lunn and Reilly were even better than they had been against Switzerland. The Dundalk man scintillated in the first half when his fine understanding with Carey had the Polish defence running around in circles. The way he slipped the ball along the ground to Carey and Fallon gave the left wing pair the feeding they desired and undermined the confidence of the defenders."