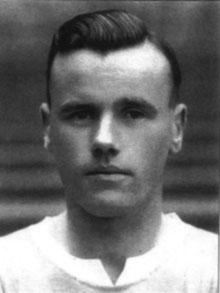 Paddy Clarke was the first in a long line of Dundalk-born full backs whose performances earned them an opportunity to appear on a larger stage.

A product of local club, St Patricks, his promotion from junior football to first team duty arose in the 1932-33 season when regular full Davy Nelson was injured during the League campaign.

By the time the season was over he had a League Championship medal and a Shield runner up memento. He and Jack McMahon from Ardee were the only local players involved in Dundalk’s first League victory.

He became an ever-present for the following year, and his excellent play attracted the attention of number of Cross Channel watchers.

As soon as the season closed he was on his way to Leicester City, in the company of manager Steve Wright, and his display in a Reserve game against Arsenal was enough for Leicester—he became the first player to go straight to an English club after serving his apprenticeship with Dundalk.

However, he spent his four Leicester seasons in the reserves, making just one League appearance and winning 4 Leicestershire Senior Cup medals. Nonetheless, the Irish FA checked with Leicester on his availability for the International team’s European tour in the summer of 1936, but he failed to make the final party.

A short spell at Bristol City was also unproductive and while he signed for Hull City for the 1939-40 season, the war put paid to all football this year. Paddy returned to Ireland, togging out with Longford Town and later Sligo Rovers in the 1938-39 season.

He scored one League goal with Sligo, when playing outside right on the occasion of Dixie Dean’s Sligo debut in front of a jam-packed Showgrounds in January 1939. Eventually he re-trained as a masseur and nurse, and returned to Leicester after the War, acting as player-coach for Leicester Frith.

On the death of his grandfather, Edward,in 1935 aged 104, he was said to be the oldest man in Ireland. In his younger days he had travelled extensively but for the previous 60 years he had been the owner of a publichouse in Seatown.