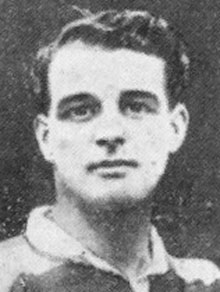 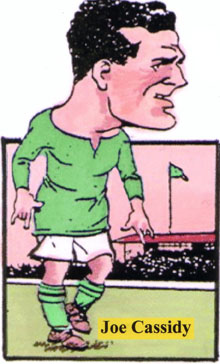 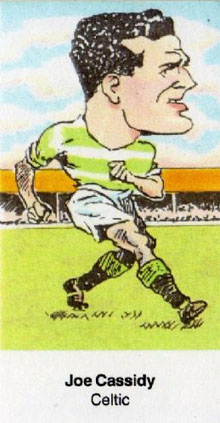 Joe Cassidy’s stay at Dundalk was a short one, but the impact he made on the club’s supporters was still fresh 25 years later when they selected him on their ‘Best Ever Dundalk XI’. Only 5 ft. 8 in. high he was a Glasgow Celtic legend (204 Apps, 104 Gls). Jimmy McGrory acknowledged Joe as his mentor in the art of heading a ball and picks him at inside-left on his all-time team.

Joe’s 1923 Scottish Cup exploits alone was the stuff of legends. It was not until the fourth round that any other Celt produced a Cup goal: Joe had provided all 9 goals in the earlier rounds, which were won 3-2, 4-0 and 2-1. In the Motherwell semi-final his strike within 30 seconds gave Celtic a dream start and to finish the job he scored the only goal in the Final against Hibernian.

In 1912 he got his Celtic blooding as a 16 year old and he finished his Army service with the Military Medal, arriving home from France on Hogmanay 1918—and walked straight into the team at Ibrox the next day!

After leaving Celtic for Bolton Wanderers in 1924 he had another English League season with Cardiff City (1925-26) returning to Scotland to play with Dundee and Clyde, before helping Ballymena to their first Irish Cup win in 1929, getting the better of Belfast Celtic in the final.

He came to Dundalk for the 1931-32 season and in only his second game gave a stunning performance, playing inside-right to Joey Donnelly at centre-forward, in a 7-3 thrashing of Shamrock Rovers in the final of the President’s Cup—the two Joes scored two goals each. He left immediately after the first round FAI Cup loss to Shelbourne in the middle of January, returning to Scotland to play with Morton.

In his day he was acknowledged as the true product of the classic Scottish style—close in his manoeuvring, crafty in his antics, great natural ball control, individual skills that could win games on his own, a man who could make the ball talk. That was Joe Cassidy. Those Dundalk supporters who saw him for those four short months in the autumn and winter of 1931-32 would never forget him.

He was capped four times for Scotland and in the 1940s a favourite question in club programmes was “Who was the famous International whose first four children were born in four different countries?” The answer was Joe Cassidy who had children born in Scotland, England, Wales and Northern Ireland, during his journey around the different Leagues.

“While he may not be as fleet of foot as he used to be, he is an artistic player of the highest quality who doesn’t overdo the fancy stuff. He knows just how long to retain possession—until he has secured the thought-out position or has his colleague’s in position. Then he slips it to a mate ensuring his side have secured an advantage. A man who can win matches of his own bat.” Ireland’s Saturday Night on learning that Joe had signed for Ballymena.

‘An Alphabet of the Celts’ (Eugene McBride). “He was Celtic spirit incarnate and the fans worshipped him.”