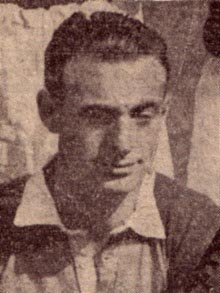 In his first two seasons with St James’s Gate (1935-36 and 1936-37), the ex Rossville Leinster League player ‘Wagger’ Byrne had played second fiddle to ace goal scorers Alf Rigby and Mattie Geoghegan. But there was disappointment when, after scoring a hat trick in the Semi-final, he failed to make the starting line up for Gate’s 1937 losing FAI Cup final appearance against Waterford.

For the 1937-38 season, prompted by Charlie Reid, he cut loose—25 League goals, another 11 in the Shield and 3 in the FAI Cup. At the end of March 1938 he set a club record for the most goals in a League match when he hit six against Sligo Rovers. But two weeks later and carrying an ankle injury, he ruled himself out of the FAI Cup final to avoid the risk of leaving his teammates to carry on with ten men. His honourable decision was rewarded with a Cup medal, when the Gate defeated Dundalk 2-1.

He had two outstanding seasons at Dundalk. Starting at centre forward, he scored six goals in seven Shield games but it was his move at the beginning of the League to the left wing with Joe Donnelly at inside left and Dicky Lunn behind them at left-half that would be remembered for many years afterwards.

On one occasion the Dundalk Democrat reported: “…Donnelly’s understanding with Byrne was at times uncanny and the triangular movements between himself, Byrne and Lunn were so well carried that the Shelbourne defence could only gape and wonder. Byrne’s cleverness on the wing is tapped, encouraged and turned to profit by the understanding he has struck up with Donnelly and Lunn…Watching this trio on Sunday provided one of the joys of Soccer, for some of the movements were sheer artistry in motion, timing and understanding of what the opposition were going to do….”

Benny Gaughran joined this trio and an in-form Jimmy McArdle for the 1939-40 season but a disastrous first round FAI Cup loss to Leinster Leaguers Distillery at the Athletic Grounds aggravated a growing financial problem. Within a week of the Cup loss the payroll was lightened—Gaughran, keeper Charlie Tizard, and International fullbacks Billy O’Neill and Mick Hoy all went North to Irish League clubs and ‘Wagger’ went to Shelbourne. One of the finest footballing teams ever to wear the White jerseys was broken up in mid-season.

Byrne continued to score with Shelbourne (20 from 42 appearances), including goals in the two drawn ties of the 1941 FAI Cup triple-decker against Dundalk, and in a later spell with Brideville but he never got another chance of playing in a Cup final. For Dundalk fans he left the memory of a memorable season and a half providing “one of the joys of Soccer”.

He also left his name permanently in the records of the League of Ireland. With the defunct St James’s Gate he was the leading goal scorer in the League for the 1937-38 year with 25 goals and on March 30th of that season he netted 6 times in a 7-1 win over Sligo Rovers, the highest individual League game score for St James’s Gate. He recorded over 100 League of Ireland career goals that included 63 in the League and 10 in the FAI Cup. In his first Dundalk season he led the club scoring charts for all games (20) and League games (12).

In the 1945-46 season he was playing with Leinster League club Grangegorman, scoring against Dundalk Reserves in the semi-final of the Metropolitan Cup.