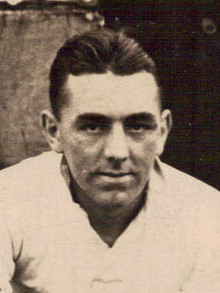 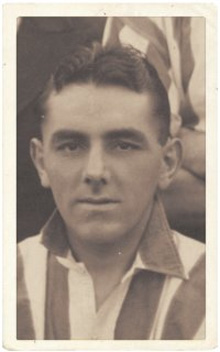 The eldest of a family of 9 of an Irish father and a Scottish mother, the 5’ 7” Mick Burke worked as a riveter in the Glasgow shipyards. His junior football teams included Dumbarton Harp, Old Kilpatrick and Glasgow Ashfield, where he was a Scottish Intermediate Cup medal winner in 1928.

His first Scottish League experience was with First Division Clyde in 1929-30 (14 apps, 1gl). For the following season he was with Aberdeen but he failed to get a first team call-up and spent the 1931-32 season with Division Two Dunfermline Athletic.

In late September 1932 he was preparing to sign for Partick Thistle when he got a better offer from Steve Wright to come to Dundalk. Arriving after the first six League games, he took the place of Jack McMahon for the remainder of the historic League championship-winning season of 1932-33. Playing on the left wing, outside of Gerry McCourt, they contributed half a dozen League goals each.

He stayed for a second season and continued to get his share of goals, finishing with 31 for his two years in Dundalk.A clever and constructive ball-player, he followed coach Steve Wright to Lincoln City in August 1934.

He spent the next four seasons with three English League Third Division clubs (Lincoln, Southport and Rochdale), playing at outside and inside right, making a total of 60 appearances in all competitions and scoring 6 goals. [League: 55 app, 4 gls]

He finished his playing career with Burton Town in the Midland League during the 1938-39 season. Afterwards he returned to the Glasgow Shipyards as an electrician. He finished his working life on the docks and lived in Glasgow for another 20 years, dying of pneumonia at the age of 82.

According to the Dundalk Democrat: ‘He has all the cleverness of the Scot in dribbling the ball….down in Cork they thought he was Alex Morton in disguise….cuts goalward with a speed and accuracy that always bodes disaster for the opposition….danger every time he receives the ball’.