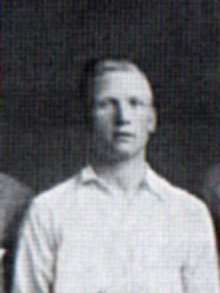 Bob Thompson had all the hallmarks required of a successful fullback. After serving his football apprenticeship while on Army service, he honed his skills in the junior leagues of his hometown Lisburn, playing with a succession of clubs including a Lisnagarvey team with the unflattering name of ‘The Duffers’.

With Lisburn United and later Sprucefield he developed a vigorous no-nonsense style and showed himself to be a player with whom forwards did not take liberties, leading to a trial with Distillery at the end of the 1923-24 season.

In his first full senior season he was the proud possessor of winner’s mementoes for both the Gold Cup and IFA Cup. During two Distillery seasons he received two call-ups for Amateur International duty, one of them against England in the company of Gerry McCourt.

He made his first appearance for Dundalk in the club’s fourth game in its debut 1926-27 season, arriving in time to play against Shamrock Rovers in Glenmalure Park’s first League game, taking Paddy McMahon’s place at right full back.

Assigned to take penalty kicks, he finished the season with 5 goals—all from penalties—sharing the leading scorer’s list with three others. At the tail end of the year he helped Queen’s Island to runner up spot behind Belfast Celtic in the Irish League.

He stayed for one season at the Athletic Grounds, moving on to Queen’s Island where he received an International cap in a 4-0 loss to France in Paris in Feb 1928. Another move, this time to Linfield, was followed by his transfer to Third Division Plymouth Argyle for £250 in April 1929.

In 1938 he was appointed trainer-coach with Portadown.

“Sturdy build….strong tackler …. fearless ….robust….does not go in for super-finesse, but prefers the direct route… plays a steady vigorous game … rock-like consistency…. A man with whom forwards do not take liberties.” Ireland’s Saturday Night.