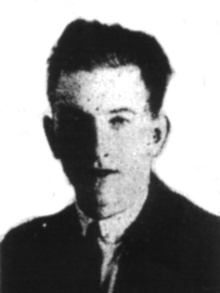 Goalkeeper Francis Strain seemed to be always available to Dundalk whenever there was a keeper’s crisis. He first came to the rescue in the club’s first Free State season of 1926-27, making two appearances in the absence of Jimmy Wilson and each was a winning one. Francis made his club debut at the Athletic Grounds in early February against Athlone Town (3-2 win) and returned in early March for a 5-1 win over Jacobs. These were the only wins from late November to the end of the season.

Three seasons later he was again called upon and proceeded to retain his 100% record—played 3, won 3—when Dundalk defeated Jacobs 8-3 on September 29th 1929, recording the first win in the 1929-30 year.

He earned his football spurs in the Lurgan and District Junior League with Donaghcloney and later with Ardoyne in the Belfast Falls League. Glenavon had tracked his progress and he joined the Lurgan club in 1922. After two seasons at Mournview Park he became a Newry Town player for their debut Irish League season of 1924-25. He collected a Steel and Sons medal with St Mary’s in the 1925-26 year.

From 1927 until 1929 he was on Linfield’s books and then returned to Newry for the 1930-31 year. Over 6ft. tall, with an above average reach, he had gathered football competition honours in the Lurgan and Mid-Ulster Leagues.

He was equally proficient as a cricketer. ‘Bowling has been his forte, for he could boast having the best trundling average for five years in Donaghcloney. He has represented his province against Leinster in the junior cricket field. Some of his performances in wrecking wickets have been quite remarkable’.(Ireland’s Saturday Night)