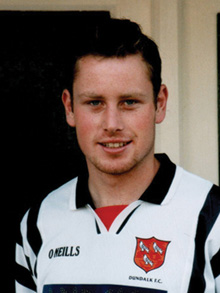 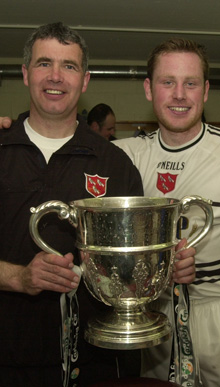 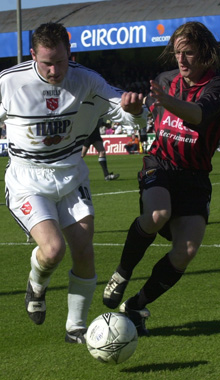 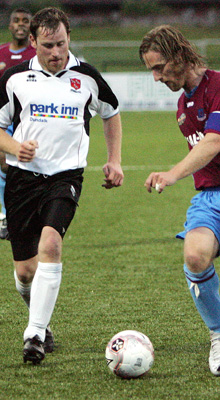 A Knockbridge man and a product of the Dundalk FC Youth Academy, David Hoey won an Under 17 FAI Cup medal with Dundalk when he scored twice in a 3-1 win over Belvedere. Dermot Keely was the manager who gave Hoey his breakthrough when he introduced him as a substitute in a 3-2 defeat to UCD in the Leinster Senior Cup on the 19th December 1995.

Having been used as a substitute on a number of occasions in 1996/97 it was Eddie May who finally gave him a start in a 4-0 defeat to Cork City in Oriel Park on 20th April 1997. That game was just a warm up though for the next match – the promotion/relegation two-legged play-off with Waterford United. Hoey started in midfield as Jeff McNamara secured Dundalk’s Premier Division status.

It was the following season, in 1997/98, that Hoey made his name. Practically ever present—missing just two games in the 44 game season—he starred in Jim McLaughlin and Tommy Connolly’s team that would finish a respectable sixth. He scored his first goal in a 5-1 win over Monaghan in the League Cup and his first League goal in a 3-3 draw in Sligo. Further goals would come including a winner in a 1-0 win over Cork City at Oriel Park.

He started the 1998/99 season in great form and scored a tremendous goal in a 2-2 draw with Derry City – but disaster was to strike in a 2-1 home defeat to Shelbourne in October 1998. After becoming ill during the match it transpired that he had a serious liver infection. He returned very late in the season to play the final matches by which time Dundalk’s fate was sealed and the club was relegated.

It took him some time to get back to his best but played a vital role in Dundalk’s Promotion winning year of 2000/01 under Martin Murray. He started the 2001/02 season at right-back but eventually returned to play on the right-side of midfield where he excelled during the 2001/02 FAI Cup run, making key assists for Garry Haylock’s goals against Shamrock Rovers in the Semi-Final and Bohemians in the Final.

He played during Trevor Anderson’s first season but decided to move up North to join Ollie Ralph at Newry Town. He then spent the 2003/04 season at Glenavon before making his return in the early stages of Jim Gannon’s tenure at Oriel Park. His second spell began when he appeared as a substitute in a 3-2 win over Sligo Rovers on 2nd September 2004. Hoey returned as a regular to the starting eleven but finished his LOI and Dundalk career in the 2006 season under John Gill. His last club appearance was in the botched and so-called play-off with Waterford United on November 25th 2006.

David continued afterwards to play in the Meath & District League with Rock Celtic. His 11-season Oriel Park career of 235 League appearances ranks him in seventh place in the club’s League match appearances table.