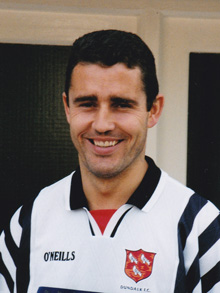 In the summer of 1992 Noel Melvin joined Division One Monaghan United from Donegal Town. After losing out to Cobh on goal difference for one of the automatic promotion spots Monaghan then overcame Waterford in the play-offs with Melvin playing a leading role—scoring in the Kilcohan Park 2-2 first leg and hitting the net again in the 3-0 Gortakeegan second leg victory, earning the Mons their first ever promotion.

They survived for one season in the Premier Division and in the following year—1994-95—finished bottom of the table when Dundalk were landing the Premiership. After 3 seasons with Monaghan, and stats of 63 apps, 9 subs and 10 goals, Noel left and joined Finn Harps where he again got caught up with more end of season heroics.

This time the Harps late run snatched second place to Bray Wanderers and a last day victory over Waterford saw Harps earn their first stint in the Premier Division.

He saw out the following season with Harps in the Premier Division before a change of job-location paved the way for his move to Dundalk. His 2-season Harps League stats read 43 apps, 5 subs 4 goals.

He came to Oriel Park at a difficult time for Dundalk FC. Eddie May, who had joined the club to replace John Hewitt towards the end of the 1996/97 campaign, had left the club late in pre-season. Dundalk looked towards Jim McLaughlin and Tommy Connolly to steady the ship.

With Eddie May already bringing Steve Williams and Nathan Wigg to Oriel Park from Cardiff, McLaughlin and Connolly added to the Dundalk ranks by signing Paul Carlyle, Shane Reddish and the Noel Melvin.

Having made his debut on the 23rd August 1997 against Longford Town in the League Cup, Melvin scored his first Dundalk goal in a 5-0 win over Drogheda United in another League Cup match at Oriel Park on the 28th August. McLaughlin and Connolly’s team steadied the ship and Melvin scored his first league goal in a 2-2 draw with Bohemians at Oriel Park on the 18th September.

He followed this up in early October with goals in the 2-0 win over Finn Harps and a 3-0 win over Kilkenny once week later. In total, Melvin made 40 appearances in his first season scoring eight goals.

In the following season he played 31 times as Dundalk were relegated to the First Division for the first time in the club’s history. Melvin was often played in centre-midfield or back in central defence. At the end of the season he considered retirement but had a change of heart and played as a central defender in the 1999/2000 season under Terry Eviston.

Dundalk narrowly missed out in promotion after the controversial “Fran Carter” affair went against Dundalk allowing Kilkenny City to take a play-off place and, ultimately, a place in the Premier League. However, Melvin had an outstanding season and Dundalk fans recognised his performances by voting him as the 1999/2000 player of the year.

At the end of the 1999/2000 season he again decided to retire due to work commitments. However, with an injury crisis and suspensions that affected Brian McCrystal, Aaron Callaghan and Stephen McGuinness, Melvin answered the call of Martin Murray to return to action.

He made his return to the Dundalk side on the 16th September 2001 when goals from Jonathan Prizeman and Martin Reilly gave Dundalk a hard-fought 2-2 draw against Longford Town. Melvin was in and out of the team and injury ended his season in November after just nine appearances, missing out on the successful FAI Cup campaign.

Melvin’s time with the club wasn’t quite finished. He returned for the First Division campaign at the start of the 2002/03 season and also played in the 5-0 defeat to Varteks Varazdin in the UEFA Cup in August 2002. However, he soon made his last appearance when he came on a substitute in a 2-2 draw with Cobh Ramblers on the 12th September near the end of Martin Murray’s reign.

With 3 clubs he had made 219 League game appearances across 11 seasons.

Since retiring he has made a number of Oriel Park appearances in Legends and Golden Oldie games.