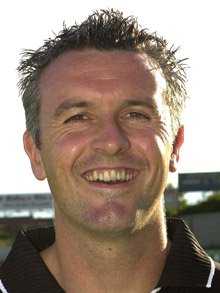 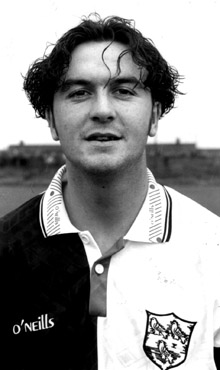 Greg O’Dowd is steeped in Irish Football with his father Tony a past President of the Leinster Football Association, a brother Tony who was goalkeeper at Leeds United and Shamrock Rovers and he’s married to a sister of Tony Cousins. He played for the Irish U/15s to U/19s and was with Brighton for five years.

He was aged 15 when he left Home Farm to begin a two year apprenticeship at Brighton and Hove Albion, followed by a two-year stretch as a full time pro. He captained the Brighton Youths team and the Reserves and travelled with the first team on a number of occasions.

But a financial crisis lead to a mass unloading of the playing staff, including the complete reserve team and it was back home for the young Dubliner.

He accepted the offer by manager Con Flanagan to sign for Longford Town and with it the opportunity to continue full time training on the League of Ireland FAS scheme.

Later under Dermot Keely who replaced Con Flanagan he was converted from his right full spot that he had been accustomed to since his schoolboy days to a midfield role.

He followed Keely to Dundalk for the 1993-94 season but an injury in the opening day fixture against Bohemian in the championship winning 1994-95 year knocked him out of contention and by December he was with Shamrock Rovers enticed there by the opportunity of first team football under manager Ray Treacy.

But after a dozen first team starts with Rovers, at the beginning of the 1995-96 year he was with just-relegated Coleraine in the Irish League and was one of the key signings, playing as a central midfielder, that transformed the side after struggling in the early season cup competitions.

A re-vamped squad simply tore through the rest of the newly-inaugurated Division 1 finishing 18 points above the runners up.

Coleraine opened the new season in fine form, winning their first seven matches in all competitions and the Ulster Cup was heading back to Coleraine for the first time in ten years.

This success provided the platform for an impressive start to life in the Premier Division as Coleraine won seven of their first eight games, to sit proudly at the top of the table. But a mid-season wobble and a weak finish opened the way for a late run from Crusaders, sufficient to leave a 3-point margin in the final table.

Coleraine’s reward was a return to European football for the first time in a decade and an aggregate 10-1 defeat by Grasshoppers Zurich, with Greg scoring the lone Coleraine goal (described as ‘an absolute cracker’).

Armed with several Irish League medals, Greg headed back to the League of Ireland but could do little to save Drogheda from relegation, after collecting just 15 points in the 33-match Premier Division.

There was a quick bounce back as Drogheda were promoted at the end of the 1998-99 season, passing Dundalk on their way down, but just as quickly Greg was back in the First Division with another Drog’s demotion.

Greg then switched sides with a second spell at Oriel Park, under Martin Murray. A near-ever present, he collected his second Division One memento as Dundalk returned to the Premier Division.

After a single season back at Oriel he left for UCD passing another midfielder—Ciaran Kavanagh—going in the opposite direction and he finished his senior career with the Students.

He was player/manager of Newbridge Town from 2003 to 2009 and later managed Leixlip United and Portlaoise.