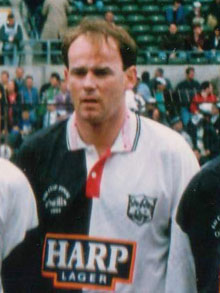 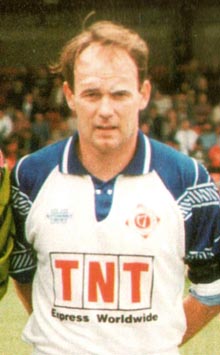 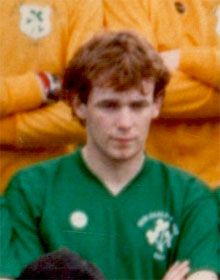 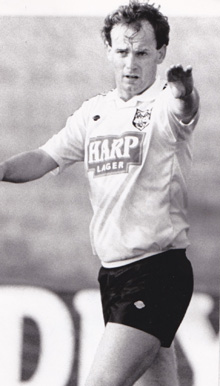 A no-nonsense defender with youth international honours on his CV, Ronnie Murphy’s three seasons with Shamrock Rovers included a Leinster Senior Cup win and squad membership of the Jim McLaughlin-bossed League of Ireland team that travelled to New Zealand in May 1982 for a 5-match series against the All-Whites in preparation for their appearance in the World Cup Finals.

He moved to Bohemians at the end of the 1982-83 year—Jim McLaughlin arrived a few weeks later and set Milltown alight while Ronnie ended up with the chasing Bohemians.

In his seven Dalymount seasons—where for a while his central defence partner was his brother Barry—he collected two League Runners Up medals (and was third on another two occasions) while just about every trophy ended up at Milltown.

A move to Dundalk for the 1990-91 season finally secured his League Championship medal. Partnering Martin Lawlor, James Coll and Dave Mackey in a defence that’s a candidate for the ‘Best Back Four’ in the club’s history and notwithstanding an opening day 5-1 hammering by Shelbourne, they went on to keep 23 clean sheets and concede just 12 more goals, enroute to a last day clinching victory against Cork City.

But the much-coveted FAI Cup medal eluded Ronnie and he had to be content with a runner-up memento after Shelbourne were victorious in the 1993 by a single goal.

After the Cup final loss, Murphy went to Monaghan but financial constraints in his second season saw him move on. Monaghan hadn’t been able to pay their players and as a result they became free agents.

With just a third of the season remaining, Finn Harps manager Patsy McGowan, with his eyes on promotion, moved to strengthen his squad and Ronnie ended up in Ballybofey.

After some early April defeats Harps automatic promotion prospects disappeared and it took a draw in the last match in Rathbane for Harps to snatch the play-off spot from Limerick, surviving on goal difference. But it was all in vain—after two scoreless draws and extra time against Athlone Town, Harps lost 3-5 in a penalty shoot-out.

Ronnie stayed for a second term, where he was joined by ex-Monaghan Noel Melvin, and this time there was no mistake. But along the way there was plenty of managerial fun and games—Patsy McGowan was sacked in December, being replaced by Charley McGeever as care-taker manager until the February appointment of Dermot Keely.

Bray Wanderers were clear winners from a long way out but Harps had to battle their way against Cobh and Home Farm before finally achieving their place in the Premier Division for the first time.

After missing just two games in the promotion year, Ronnie was released and moved to Division One Longford Town, where he closed the book on his 18-season League of Ireland career, seeing out his second season as caretaker-manager at Strokestown Road after the March 1998 resignation of manager Michael O’Connor.

Reviewing Dundalk’s 1990-91 League Championship victory the Argus commented: “He was the bargain signing of the season, coming on a free transfer from Bohemian. Missing only the opening game, it was a case of third time lucky, he having twice before collected runner up medals.”