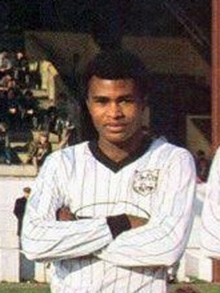 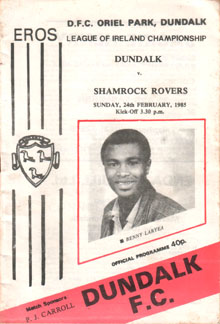 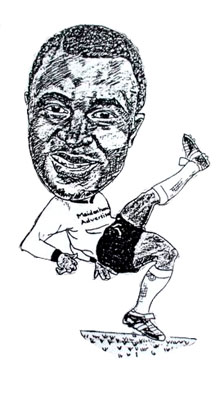 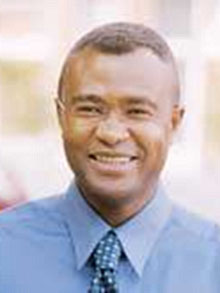 Striker Benny Laryea had gained Middlesex School and County honours before progressing to Watford, where he spent six months as a non-contract professional and turned out for a couple of games with the Reserves in the Midland League, scoring once.

He was just past his 18th birthday when he joined Maidenhead in the Isthmian League First Division for the 1980-81 season. For each of his first three seasons he was the club top scorer, with a record of 47 goals from 109 appearances.

In his third Maidenhead season, manager John Dempsey was sacked in mid-season and Benny also left, following Dempsey to Dundalk for the 1983-84 season. His first Dundalk goal came in a pre-season friendly against Omagh and he followed up by scoring twice on his competitive debut on the opening day of the season in a City Cup game against Bohemians.

There was no shortage of fire-power up front, with a three-pronged attack consisting of Benny, Mick Fairclough and Tommy Gaynor. For a while the Dundalk lineout had four strikers when the injury-prone Hilary Carlyle was available!

Unfortunately the year was dominated by a combination of poor discipline on the field and fractious relations between the manager and the Board, leading to Dempsey’s mid-season departure with a costly settlement, and the supporters’ club passing votes of no confidence in the board. None of this helped team performances but it didn’t stop Benny, whose 17 goals out-gunned all other contenders, from racking up his fourth successive top scorer achievement.

For the following season he joined Fourth Division Torquay United, recently purchased by ex-Chelsea David Webb, but he could do little to avoid them heading for the bottom of the League and having to apply for re-election to the Football League for the first time since the 1920s.

Benny didn’t wait to see the end—in January he was back at Oriel Park, now under the care of Tommy Connolly, partnering Billy Wright as Dundalk staggered over the finishing line just two points above the guillotine level of the new First Division. Key to winning a place in the new Premier Division was a lucky win over Longford at the end of March—the only victory in the last 13 League games.

Benny failed to stop the rot—his 10 League games yielded the paltry total of seven goals in aggregate, to which his contribution was a solitary goal—and for the last two games of the 1984-85 season he was replaced by Dessie Gorman.

After his second Dundalk spell, Benny turned to coaching and secured his FA coach’s badge. For a number of years he coached at under-age level with his local club, Windsor, and also turned out periodically with the club in the Isthmian League.

He returned to Maidenhead in December 1989, relegated to Isthmian Division Two in his absence, picking up where he had left off by scoring on his return match and despite playing just 14 games before injury ended his season, he finished joint top scorer.

A straight 13-match opening win sequence in 1990-91 was the springboard for an outstanding season, when the club gained promotion to Division One and Benny’s 35 goals was the highest club score in over 35 years.

For two more seasons Benny continued to bang in the goals and his 22 in 1991-92 was his sixth season top scorer award. After struggling with a knee injury for a number of years, he decided to quit playing and when he left the club in January 1993 he was the leading season scorer at that time.

He finished his 7-season Maidenhead career with 123 goals from 231 appearances and he is one of only a dozen who have been inducted into the club’s Hall of Fame. After leaving Maidenhead, he coached and managed at semi-pro level at a number of Isthmian League clubs, Hendon , Yeading , Wembley and Kingsbury, at both reserves and first team level.

Now the Director of Housing for a Housing Association in London, his only football involvement is going on scouting trips for his brother who is a football agent.

When he joined the club John Dempsey wondered how the club’s supporters would take to a black player, the first in the club’s history. He got his answer at the season’s end when Benny was the runaway selection as Supporters’ Player of the Year for the 1983-84 season!