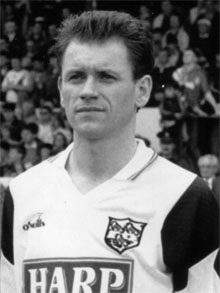 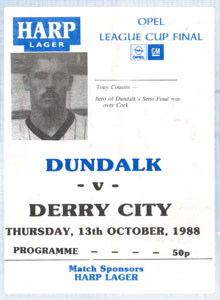 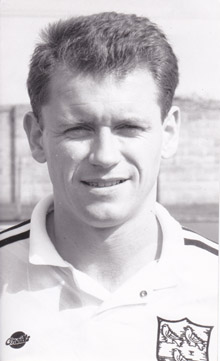 Dave Mackey came of sound football stock—his father Gerry was a Shamrock Rovers legend, one of the hugely successful Coad’s Colts from the 1950s and who had all the honours, including an International cap and ten League of Ireland caps.

Before signing for Shamrock Rovers in 1980, he had played with schoolboy team Pearse Rovers in Sallynoggin and had spent two seasons in the Leinster Senior League with Railway Union.

But after two years with the Rovers Reserves he left and it was with Shelbourne in the 1982-83 season that he made his League of Ireland debut. He quickly became a fixture at full-back, becoming an ever-present when he was available for duty.

However, the Reds were in one of their barren periods and after escaping the drop to the new Division One in 1984-85, thanks only to goal difference, they paid the price the following year. In 1985-86, the first Premier season, they lost out to Cork City, ironically on goal difference.

Although they bounced back up immediately, the Reds showed no real improvement and after another unproductive season at Tolka Park, Dave was ready for a move after six Reds seasons.

After Dundalk had landed the League-Cup Double, he joined the Oriel Park set-up under Turlough O’Connor, releasing Gino Lawless to revert to his central midfield role, and became a fully paid-up member of the 1990-91 Premier Champions, with a back-four comprising probably one of the most experienced defences ever by a Championship-winning squad in James Coll, Martin Lawlor, Ronnie Murphy and Dave.

A broken leg suffered in a League game against Shamrock Rovers in January 1992 effectively ended his playing career.