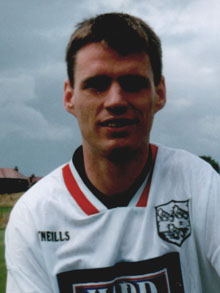 Stephen came to Dundalk in August 1995 from Cork City, where he had won a League Championship medal in 1992-93. He also had three Munster Senior Cup medals and had been a member of the Irish World Students games squad.

Selected Dundalk Player of the Year in 1995-96, he picked up 7 League of Ireland caps during his two years at Oriel Park.

He made his League of Ireland debut with Waterford, before moving to Middlesbrough, returning to Cork City in July 1991 and was a member of the Leesider’s team that lost in the FAI Cup final to Bohemians.

He sampled European Cup fare in both legs of Cork’s preliminary round defeat of Cwmbran Town and played in both games of the first round proper against Galatasaray.

After his two Oriel Park seasons he returned to Cork City. By the end of the 2000-01 season he had been credited with almost 300 National League appearances.

He had International appearances at U-15, U-16, Schoolboy, Youth and U-21 levels.