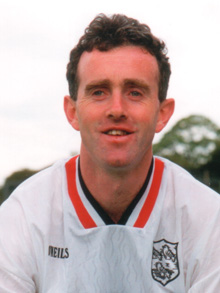 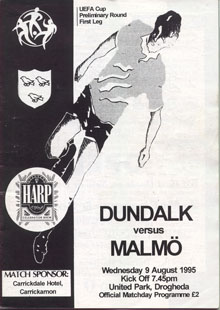 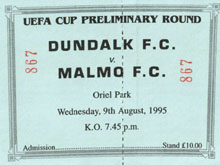 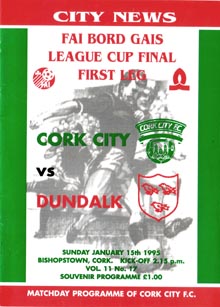 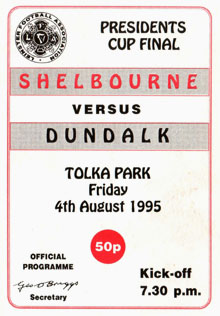 When Dermot Keely signed centre-back Anto Whelan in the summer of 1994, there were mutterings among the fans—Whelan was 35 years of age and had almost 300 League games under his belt. As well as 12 National League seasons he had spent three years with Manchester United.

But Keely knew what he was getting—pure gold—and the delivery of the League Championship provided all the justifications required. Good on both feet, he was comfortable in any of the back four or five positions.

Beginning the Dundalk season with a five-man defence, Whelan teamed up with James Coll and Mick Doohan but as confidence developed and the prospects of success grew stronger, Keely reverted to a flat back four. This released Doohan for a forward role while Coll and Whelan confidently steered the ship through the treacherous run-in to the finishing line and to the momentous last day heroics against Galway at Oriel Park.

He stayed for an injury-interrupted second season and after a season as player-manager with Drogheda United, helping them to a second place Division One promotion spot, he closed his career with another promotion-winning effort, calling a halt after seeing Bray promoted in the 1997-98 year, nearly 20 years after he had made his National League debut.

As a schoolboy with St Joseph’s Boys, Anto was well used to success, winning League titles at each level from under-14 to youth. He had also won the FAI Youths Cup and the prestigious Pepsi Cup—in addition he had International Youth caps. He spent his first Bohemians season with the reserves, winning the Reserve’s Player of the Year Award.

Debuting in September 1979 with Bohemians, he had made two appearances in European competition before signing for Manchester United in August 1980 for a fee of £30,000.

He made just one first team appearance at Old Traffic before returning to play with Shamrock Rovers for Jim McLaughlin’s first season at Milltown, in time to collect his first League Championship memento.

He had no success over the next few seasons with Cork City, Shamrock Rovers (briefly) or Bray, but a six-year spell with Shelbourne, from 1988 to 1994, brought plenty of silverware—League Championship in 1991-92 and the League-Cup Double in the following season.

When he was with Manchester United he was capped at the under-21 level against England at Anfield.