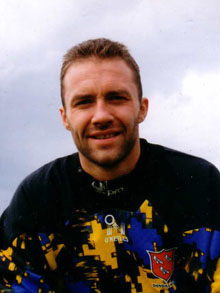 Previously with St Mirren, Clyde and Raith Rovers, he had 25 under-age Scottish Caps. He made his debut at the age of fifteen for his hometown club, Inverness Thistle (Scottish Highland League).

A move to Chelsea (Sept 1985) brought him his only English League game, when he was promoted from the youth’s team to first team duty against Watford in the last game of the 1985-86 season.

A year later he returned to Scotland, where he became back-up keeper with St Mirren and over seven seasons there he also had loan spells with Sterling and Arbroath. His chance for permanent first team duty came in 1993-94 with a move to Clyde, where he became Player of the Year in his first season.

After another active year with Clyde he moved to Raith Rovers, but after just two games in the 95-96 season he gladly accepted John Hewitt’s offer of a move to Ireland. At this stage he had played 163 first class games.

Very popular at Dundalk, he was an ever present for the 33 League games and the play-offs against Waterford. By then, manager Hewitt and all the other Scottish players in that year’s Oriel Park squad had gone home and after the play-off games against Waterford Les also returned to Scotland, spending the next five seasons with Caledonian Thistle and a final posting with Ross County. His Scottish League career included 241 appearances.

In 2004 he was appointed manager of Nairn County in the Highland Football League, where he was still in charge at the beginning of the 2010-11 season.