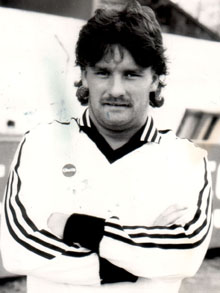 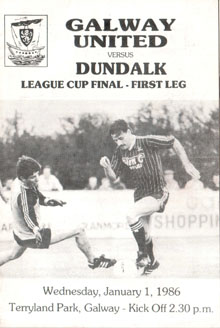 When Larry Murray was signed by Tommy Connolly for the 1984-85 season, he came with an impressive CV that included two FAI Cup winners’ medals, a League Championship memento and six appearances in European competition.

From Walkinstown, in the May 1977 final of the prestigious Under-18 Pepsi Cup, he had capped a brilliant individual performance when scoring twice for Home Farm, ensuring victory over St Joseph’s Sallynoggin.

Twelve months later, after just five League games, he was the recipient of an FAI Cup winner’s medal after the Johnny Giles-managed Shamrock Rovers defeated Sligo Rovers in the final.

Shortly after the FAI Cup final he was with the Irish U-21 squad, playing in the Toulon tournament, collecting three caps. Playing on the right wing and possessing tight control and the confidence to go at opponents and commit them, he became a firm favourite with Rover’s fans.

But he fell out of favour and becoming disenchanted with Giles’s full time policy, he left in the autumn of 1979 to join Waterford. Before the season had ended he was the proud possessor of another FAI Cup medal when Waterford, after more than forty years, brought the cup back home, defeating St Patrick’s Athletic by a single goal.

Larry played a key role in the final—after been taken down outside the box, he whipped the free kick deep into the far side of the box into the path of Brian Gardner who hammered a superb header home off a post.

He played in all four games in the following season’s European Cup-Winners’ Cup, defeating Malta Hibernians in the first round and then losing to the Russian side Dynamo Triblisi.

After two additional and unproductive terms with middle-of-the-table Waterford, Larry joined Turlough O’Connor at Athlone Town for the 1981-82 year, where he again struck gold, collecting a League Championship medal in his first year. With just one loss, O’Connor’s second Championship victory with the Midlanders was won by a massive 16 points.

In the previous December Athlone had taken home the League Cup, for the third time in four years, defeating Dundalk in the final and by the season’s end Larry had a full hand of winner’s medals in each of the major National League trophies—League, FAI Cup and League Cup. After another Athlone season, when he added to his European appearances in the European Cup against Belgian side Standard Liege, Tommy Connolly enticed him to Oriel Park.

But in a season that had the club sweating about its place in the soon-to-be Premier Division, Larry had a nightmare season, variously blamed on niggling injuries and lack of fitness and made just three first team starts in the League, coming off the bench on eight occasions.

For the following term he was reunited with the Athlone pairing of Turlough O’Connor and Paddy Smith and there was a considerable improvement, but a December injury knocked him back and afterwards he failed to dislodge his replacement, Tom McNulty. The arrival of Terry Eviston made him surplus to Turlough’s requirements early in the 1986-87 year and he was released.

He later had spells at Home Farm, Shelbourne and Sligo Rovers, finishing his League career back where he started at Shamrock Rovers.