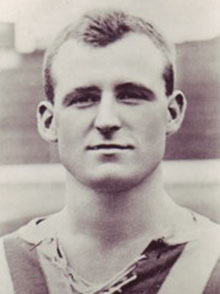 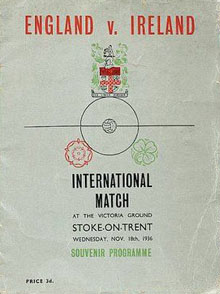 During Joe McCleery’s three seasons in charge of Dundalk there seemed to have been an endless supply of players arriving from Northern Ireland, many of them described by the local press as ‘promising Northern juniors’.

Many played a game or two and disappeared. The 1928-29 season was no different and the arrival in March 1929 of another new name caused no great stir.

Billy Mitchell, a townsman of McCleery’s, was just three months over the age of 18 when he made his debut, playing at inside right, in a Shield game at the Athletic Grounds against Jacobs.

But this one was different—he became an ever present for the remainder of the year, and after three appearances had forced his way into the line up for the Leinster Senior Cup final against Shamrock Rovers, the first competition final contested by the club. It took a replay for the powerful Rovers to claim the trophy.

Immediately after Dundalk’s last game of the season Billy was signed by Distillery as an amateur, making his club debut a week later and within a few days had helped them to win the Belfast Charities Cup.

Within 16 months he had earned his first appearance with the Irish League team and in 1932 had secured full International honours. Now converted to right half, he was transferred to Chelsea in 1933 for a fee of £200, after making 159 appearances for Distillery, and over the next seven seasons played 110 League games with the ‘Pensioners’.

A great tackler, he had a fiery temperament and served a couple of lengthy suspensions. His last International appearance in 1938 brought his total number of caps to 15. He finished his playing career with Bath City in the Southern League in the first post-war seasons of 1945-47.

Before coming to Dundalk in March 1929 he had seen service with Intermediate side Linfield Rangers and with Cliftonville in the Irish League.