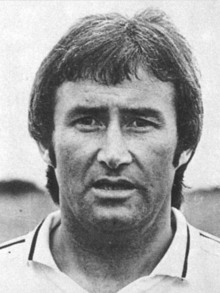 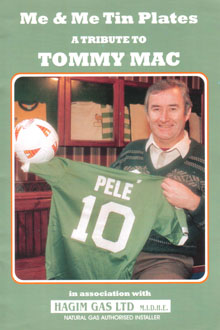 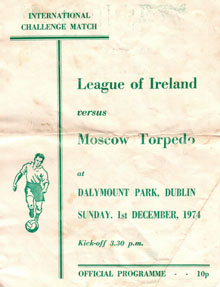 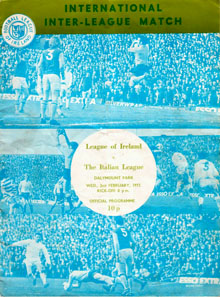 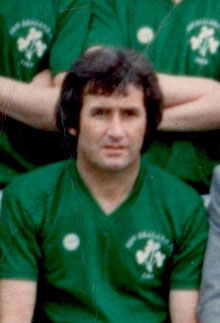 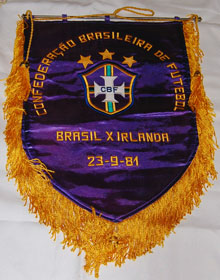 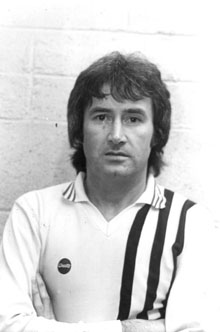 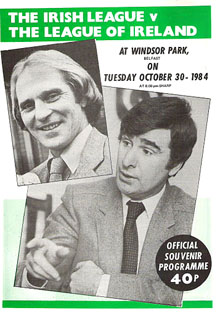 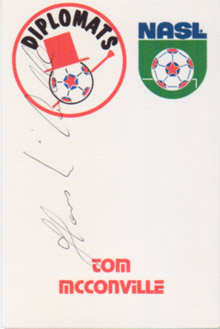 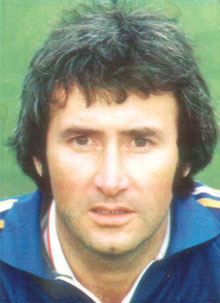 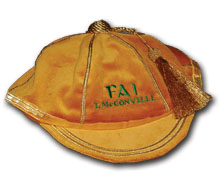 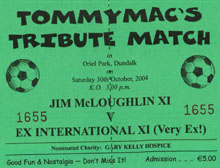 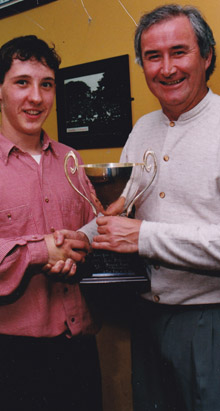 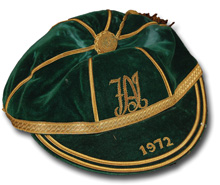 By whatever yardsticks and achievements the accolades ‘greatness’ and ‘legendary’ are assigned, Tommy McConville ticks all the boxes. Competition Honours?...17 wins with Dundalk (10 runners Up) and another 4 wins while with Waterford. Representative honours?...More than 30 between International and Inter-League caps. Number of games played?...More than 800 first class games, a record 580 with Dundalk and getting on for 700 in the Dundalk shirt when account is taken of his friendlies, Youth team and Reserve games. Awards?... The Soccer Writers Personality of the Year in 1981-82, three times Dundalk Player of the Year, twice recipient of the Soccer Writers Player of the Month Award and in 1993 he was honoured with an FAI Cup Hall of Fame Award in the company of two other club legends, Johnny Matthews and Joe Ralph. Longevity?...21years and 6 months between his first and last Dundalk games.

And if there are any marks for agelessness, there was a gap of more than 28 years between his League of Ireland debut for Dundalk in August 1964 and his appearance for Bank Rovers in an FAI Cup game against Tramore Athletic in February 1993.

For Dundalk supporters Tommy ‘Mac’ was the best League of Ireland defender of his era. For many of them he has never been bettered. His hallmarks as a defender, whether at centre or wing-back, were astute reading of the game, intuitive anticipation, natural athleticism—brute force was not for Tommy—and thanks to his ball playing style and majestic elegance he stood out wherever he played, whether in the League of Ireland or in the major stadiums of Europe, or North and South America.

His football apprenticeship incorporated both Gaelic football at the De La Salle School and association football with the Gerry Gover-managed Rangers. He was just 18 in 1964 when Rangers landed the Dundalk Summer League Double, adding the Harp Cup to the League Championship.

An earlier spell at Oriel Park with the club’s youth team under coach Colm Bellew had been unproductive but he returned in the summer of 1964 and in the third match of the season made his senior debut in a 2-2 Shield visit to Cork Celtic, spending the year with the Reserves under the management of Tommy Rowe.

Before the season had ended he had made a start to his Dundalk honours collection when the Reserves, consisting mainly of graduates from the same Rangers squad, had been victorious in the inaugural running of the Castrol Cup.

During this season there were regularly three McConville brothers lining out in the Dundalk colours—older brother Brian alternating between the first team and the reserves, while younger brother Wally was with the club’s Youths team.

Tommy’s first team outings in the following year—the last ‘old Oriel Park’ season—were at inside forward and centre forward but like many young local players he drifted away from Oriel Park during the successful 1966-67 season under Alan Fox, spending some of that year with Bangor in the Irish League, then managed by Ted Harte.

He returned to Oriel Park for the following season and in January 1968 lined out against Shamrock Rovers in the replayed final of the Dublin City Cup, extracting a magnificent save from Rover’s keeper Mick Smyth in the dying seconds of extra time to send the match to a second replay—a week later at Tolka Park Tommy had pocketed his first Senior medal, thanks to a lone goal from Ben Hannigan.

By the time that Liam Tuohy became Dundalk manager in 1969 he was firmly entrenched in the Dundalk number five jersey and under Tuohy’s three-year spell as manager his career would receive a number of significant boosts.

His first Inter League cap came in September 1971 in a 2-1 loss to the English League at Lansdowne Road, followed two weeks later by his first Irish International cap in a European Championship Qualifier 6-0 loss to Austria.

Recognised as one of the most outstanding prospects in the League of Ireland, in June 1972 he travelled with the Irish International party to Brazil for a 4-match tournament but was not called upon for duty.

On his return there was no shortage of takers when Dundalk’s perilous financial position dictated a sell-off of its leading players and Tommy joined Turlough O’Connor, Sean Sheehy and later Paddy Turner in a mass exodus—the proceeds saved the club from almost certain extinction.

Tommy ended up with Waterford where he continued to collect honours—League Championship and Top Four Cup in 1972-73 and the League Cup and Presidents Cup in the following term, and five more call-ups for International duty.

He also drew the attention of Manchester United, who offered a substantial fee but unknown to Tommy the Waterford officials demanded double the offered amount and United immediately withdrew.

When Tommy became aware of the circumstances under which the deal collapsed he refused to play with Waterford, making it clear that he would sit out the rest of his contract. Within weeks he was playing with Shamrock Rovers, where Liam Thuohy was back in charge.

When Jim McLaughlin was putting together his squad for the 1975-76 year he targeted Tommy for the centre-half spot and convinced the Dundalk board to find the funds by organising a collection amongst themselves! The rest is history.

Over the following eight seasons Dundalk, under McLaughlin, became the most dominant team in the League of Ireland. Tommy’s sideboard would become over-filled with Competition Honours, Inter-League caps and awards. Capping it all was the prestigious Soccer Writers Personality of the Year Award in 1982.

Under McLaughlin Tommy’s role had been changed after three seasons from central defender to wing-back partner of Martin Lawlor after the arrival of the Paddy Dunning-Dermot Keely partnership. This quartet—the Mean Machine—became the most formidable defence in the League. During the 1979-80 season they conceded just 13 goals in the 30-match League campaign.

During the off-seasons Tommy was sampling the North American Soccer League, spending three summers with Washington Diplomats, under coach Dennis Viollet, and another one with New York Apollos.

With Dundalk he was getting the opportunity of competing successfully against the best in Europe—his 19 appearances included games against Liverpool, PSV Eindhoven, Glasgow Celtic and Tottenham Hotspur.

In eight European encounters, covering a six-year spell from 1976 to 1981, Tommy had been a key member of McLaughlin’s teams that conceded just three goals at Oriel Park.

He closed his Dundalk career at the end of the 1985-86 season, having completed a record 580 club appearances and joined First Division Finn Harps as player-manager for the following season.

Strongly in contention for honours entering the New Year, a disastrous finish, losing the last four games, sent the team tumbling down the table to finish in fourth place. In spite of the significant improvement over the previous year, Tommy and his assistant John Minnock were controversially sacked after the last match.

In the following year he had a second Irish League spell, this time with Newry Town after player-coach, Matt Bradley, broke a leg and asked Tommy to provide some on-field experience to a relatively young squad. A fourth place League finish demonstrated that the near 42-year-old Tommy could still hold his own with the best.

Tommy continued to turn out in the Dundalk Summer League, collecting League honours in 1992 with Park Celtic and at the age of 47 was part of the Bank Rovers squad that qualified for the 1993 FAI Cup.

In the 1990s he coached the Dundalk reserves for a number of years and until his death he remained an Oriel Park matchday regular. And in his mid-60s he still kept his boots in readiness for call ups to Legends and Veterans games!

Noel King who played alongside Tommy with Dundalk said: “I learned a lot from Tommy. A class act and a living legend, he was one of the great League of Ireland players …. It was great to have known him.”

Most Appearances in Europe 19

Soccer Writers Personality of the Year 1982