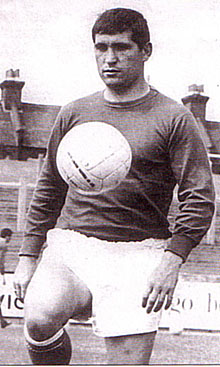 *An England Youth and Under-23 International and a full England reserve, John Smith had 400 team appearances with seven English League clubs before coming to Dundalk as player-manager in the summer of 1973.*

Rated one of West Ham’s finest discoveries, he had Youth and Under-23 International caps and was a key figure in the club’s 1957-58 promotion-winning side. Twice selected as an England Reserve and on the verge of full International honours, in March 1960 he was transferred to Tottenham Hotspur.

But he became an almost permanent reserve at White Hart Lane, competing with three of the great players of the era, all at the top of their form—Danny Blanchflower, Dave Mackay and John White—and in four years he made just 28 appearances.

His next move, to Swindon Town for a fee of £7,000, was the most rewarding of his career where he won a League Cup medal and helped Swindon to promotion to the Second Division. Wearing the number nine shirt, he was the creative midfield general and the key figure in the victorious League Cup campaign, playing in all 12 games and scoring 3 goals (two in the semi-finals against Burnley).

Although he came close to missing the Wembley final against Arsenal because of injury, he provided the experience and the craft necessary to overcome the First Division side.

He was appointed Dundalk manager in the summer of 1973, under a new and ambitious Board, with a decent player budget and considerable expectations. He recruited virtually a new squad with a strong sprinkling of ex-English League players including Jimmy Dainty, Dougie Devlin, and Willie Penman, stiffened by a batch from the Irish League—Con Davey, Jack McManus and Peter Watson.

Despite an excellent season start—11 wins from the first 14 games—the bubble burst before Christmas, when there were more English League imports, including John Coyne and Willie Waddell.

The sole success came in the Leinster Cup when Bohemians were despatched 1-0 in a replay but it was poor consolation for the 4-0 Oriel Park Cup loss to the same opponents a month earlier and for a sixth place finish in the League.

The following season saw more reinforcements arriving at Oriel Park, including Richie Blackmore and two Americans, Bobby Smith and Dave Derico. But nothing seemed to work and a starting sequence of just three wins in the first dozen games, and tenth place in the League at the end of October, sealed the manager’s fate and was the prelude to his departure by November, being replaced by Peter Watson as caretaker-manager, clearing the way for the appointment of Jim McLaughlin.

He later returned to London where he managed a social club until he suffered a fatal heart attack at the age of 49.