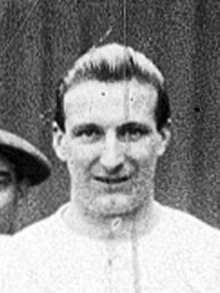 Right back Fred Mason had been on the books of 4 English League clubs from 1921 until his arrival at Dundalk in the summer of 1928—Coventry City, Cardiff City, Rochdale and Merthyr—making a total of 57 League appearances. He was much busier in his single Dundalk season, missing only two games.

In the club’s third year in the Free State League, and with Sam Patton at centre half and John Mahaffey in goals, the defence provided the basis for a considerable improvement on the first two year’s experience, with qualification for the semi-final of the FAI Cup and the final of the Leinster Senior Cup.

There were only two home losses, thanks to a defence that conceded just 27 home goals over 18 matches. It was also manager Joe McCleery’s last year in charge at Dundalk—he accepted an appointment from Derry City to do the same job he had successfully accomplished at Dundalk: Derry had been accepted for membership of the Irish League for the 1929-30 season.

Joe’s first recruitment was to take Fred Mason from Dundalk. McCleery had a high regard for Fred, both as a player and a man and he was appointed Vice-captain for Derry’s first Irish League season.

A crowd favourite at the Brandywell, Fred continued to line out up to the mid-1930s. He settled in Derry and was for many years a genial host at Mason’s pub, which became a habitat for many football people.

He stayed that long at Derry that it was said of him that ’he became a Derryman in all but birth’ and as a hale and hearty octogenarian he was able to welcome back Derry City’s return to senior football when they became members of the League of Ireland in 1985.