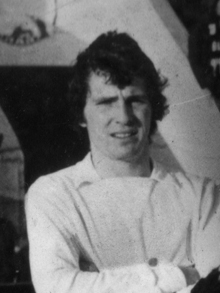 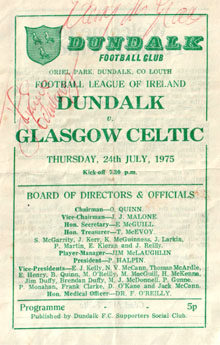 Youth International midfielder Sean Sheehy, from Dublin club St Josephs Sallynoggin, came to Dundalk in the summer of 1970. His father, Roger, was a Dundalkman and an active member of the Dublin branch of the Dundalk Supporters’ Club.

After making his debut in the opening day fixture of the 1970-71 season in a Presidents Cup game against Shamrock Rovers, he became an automatic choice for his first two Dundalk seasons. By St Stephen’s Day 1970 he had collected his first competitive honour after Dundalk’s comprehensive 5-2 victory over Shamrock Rovers in the final of the Leinster Senior Cup.

In the following season he scored the only goal in the Shield Semi-final victory over Bohemians, setting up an impressive 5-0 final victory over Drogheda. He made two appearances with the Irish Amateur Olympic team in 1972, losing 3-0 on aggregate to Yugoslavia, coming on as a sub in the Ballybofey home tie and starting in the away game.

He was one of the key quartet who were transferred at the end of the season in the midst of a growing financial crisis—the others were Turlough O’Connor, Tom McConville and later Paddy Turner.

Although he failed to make the Preston North End first team during the 1972-73 year, he was called upon for International duty with the Irish Under-23 team on two occasions. Released at season’s end, he had trials with Norwich and Dundee United, where a hat-trick in his first Reserve game secured a contract.

But another relatively idle season, thanks to a cartilage operation, with just 3 League appearances, saw him return to Ireland, joining Bohemians under Billy Young for the 1974-75 year.

At Dalymount his 5 League strikes saw him share the goal-scoring duties with Noel Mitten (8) and Turlough O’Connor (7), as Bohs secured their first Championship in almost 40 years. He added League Cup and Leinster Cup medals to his League Championship honour.

Before the following season had started Jim McLaughlin had enticed him to a second spell at Oriel Park, where he was joined by Terry Flanagan, another discard from the Bohemian’s League-winning squad. Their twin-strike force haul of 19 League goals landed them with back-to-back League medals, when McLaughlin delivered his first Championship.

For the following season there was hot competition for starting spots with the addition of Frank Devlin and Mick Lawlor to the Oriel Park squad and the fast-developing Synan Braddish, and Sean began to spend more time on the bench, missing out on the 1977 FAI Cup success.

After making a single appearance in the opening-day Presidents Cup game of the following year, he transferred as player-manager to the newly-elected Thurles Town, where his 5 League goals was sufficient to lead the newcomers League goals chart and where he was voted ‘Player of the Year’.

After a season with Shelbourne, struggling in the basement of the League, he moved to Finn Harps for the 1979-80 year but after a couple of League games he was on the move again, back to Thurles Town, where he finished his League of Ireland career bringing his League haul at four clubs to 39 goals.