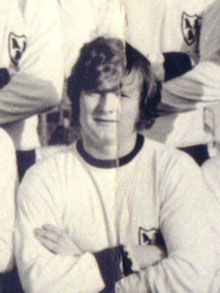 Thanks to financial constraints and before September was out, Dundalk manager Liam Tuohy in his second season as manager was forced to downsize—shorthand for saying that anybody on a decent wage was let go. The experienced hands—Mick Millington, Kevin Murray and Maurice Swan—all disappeared and the first team consisted mainly of a bunch of callow youths thrown in at the deep end.

When Newry native Joe Larkin became available after being released by Chelsea, Tuohy grabbed him and sent him on immediately in a new mid-field that consisted of Tommy Connolly, Joe Larkin and Sean Sheehy and they were joined later by the McKeever twins. Between the five of them there was a total of two first team appearances! Even reserve appearances were a scarce commodity among their CVs!!

More first timers continued to get starts but under Liam Tuohy’s astute guidance a stunning performance on St Stephen’s Day delivered the Leinster Cup to Oriel Park on the back of a final day 5-2 victory over Shamrock Rovers. Joe earned his first club honour after he had contributed two goals to a 5-0 semi-final hammering of Bohemians.

In his second season he repeated his 10 goals, again coming third in the goal stakes behind O’Connor and Turner, and again missing only two games.

The highlight of his second season was Dundalk’s Shield victory, after an 8-win stroll through the preliminary section on an aggregate 15-2 score line and a semi-final victory over Bohemians.

In the final, a vintage display by Dundalk simply overpowered Drogheda 5-0 and Joe vied with hat-trick hero Paddy Turner for the accolade of man-of-the match.

But there was a bitter end to the season when Dundalk wasted a 2-goal half time lead over Waterford in the Dalymount FAI Cup semi-final, going under by 4-2 thanks to a couple of own goals.

Joe’s third club season, 1972-73, was undoubtedly one of the worst in the club’s history—Joe was the leading League goalscorer with 5 hits!! According to the Democrat, Joe’s goal in a 1-1 draw with league leaders Finn Harps in the middle of December was the first by a Dundalk player—in the 11th game and after 963 minutes!! The two previous goals had been ogs.

It was all so inevitable with a new manager in Fran Brennan, the sale of the team backbone O’Connor, Turner, Sheehy and McConville and a worsening financial situation that brought weekly ‘crisis’ headlines to the Democrat and out of which the very existence of the club was at issue. In those circumstances on-field matters became secondary to the off-field rescue endeavours and Joe wasn’t the only player who found a new berth for the following season.

Surprisingly, after those three seasons with Dundalk he made the decision to turn his back on Senior Soccer and signed for the Newry based Shamrock Rovers competing in the local Carnbane League where he finished his playing career. Since retiring from the game he has managed local junior league team Newry Celtic for a short time.

Joe began his career playing in the Newry & District Youth League where his talents were quickly recognised and he signed for Chelsea Youth Academy as an attacking teenage midfielder with an eye for scoring goals. The Chelsea scout who recognised Joe's potential was the former Dundalk player, Warrenpoint native Vincent Gilmore a member of Dundalk’s 1958 FAI-winning team.

Joe quickly became established at Stamford Bridge and was made Captain of a very good Chelsea youth team. Just when it appeared that he had a great professional career ahead of him after three excellent seasons with Chelsea Youth, Joe made a surprise decision to return home to Newry from where he had signed for Dundalk.

The Democrat commenting on Joe’s role in an early season derby win against neighbours Drogheda: “He again vindicated Tuohy’s faith in the Newry youngster … a splendid game … excellent passes … great vision … could do with more bite in his tackling but it’s early days for this 18 year-old.”