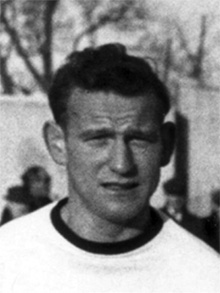 In their inaugural League of Ireland season of 1957-58, Cork Hibernians had to wait until the last Shield game to record their first victory, a 3-2 win over Cork neighbours Evergreen, thanks to two goals from Jimmy Redmond. Signed from Leinster League club Aer Lingus and originally from the schoolboy nursery Stella Maris, Jimmy was Hib’s joint leading League goalscorer (8) in that first season.

His last Hib’s game was at Oriel Park against Dundalk in November 1959, at which stage he had made 73 appearances and scored 20 goals.

Switching to St Patrick’s Athletic for the 1960-61 year, he was in possession of an FAI Cup Winner’s medal when Pats, after failing by a point to catch Champions Drumcondra for the League title, got ample revenge in a 2-1 FAI Final day victory.

In the early part of the 1962-63 year Jimmy was with Leinster League club Workmans’ Club and after an impressive performance against Dundalk in a mid-November Leinster Senior Cup game he was signed immediately.

He went straight into the first team for the opening League game on the right wing against Cork Celtic and missed only two games on the way to the League Championship victory—once when he missed his train and in late February he took time out to get married.

Having finished his Cork career with a 2-0 victory at Dundalk in 1959, his last Oriel Park game was an important League game against Hibernians, when his goal contributed to a crucial 2-0 victory, setting up the last day League Championship win.

He was the only member of the 14-man Championship winning panel to leave for the following season, which he spent initially at Sligo and he saw the year out with Drogheda.