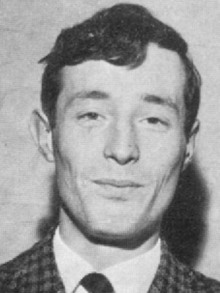 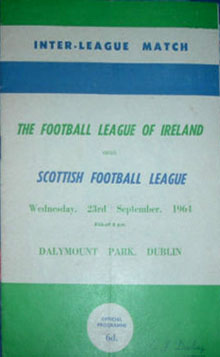 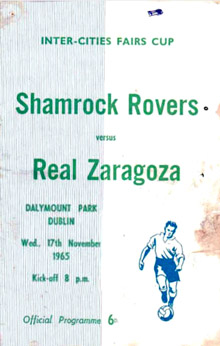 By the time left winger Tony O’Connell joined the new Oriel Park set up in the summer of 1966 he had already proven his ability with Shamrock Rovers, winning three FAI Cup winner’s medals and in the previous year’s final he had opened the scoring in the 2-0 win over Limerick. His ball skills, pace and directness made him a hit from the time he joined Rovers in 1959 and he was a handful whether lining out at centre-forward or on the left wing.

He had a number of League of Ireland caps and his performance against England’s right-full Jimmy Armfield in a 1963 2-1 League of Ireland victory over the Football League, had English League clubs at his door. But Tony had other ideas and after a spell in New York, where he was nominated for an All-Star award, he spent 1964 with Toronto City under Malcolm Allison, winning the Eastern Canadian League.

His outstanding contribution to Dundalk’s winning Shield campaign led to his first Irish Cap in October 1966, in a 0-0 draw with Spain in the European Championship. Before the first ‘Fox’ era season was over, Tony had added a League Championship medal to his collection. During his Oriel Park stay he made three further Inter-League appearances.

His Dundalk victory was his fifth Shield winners medal—he had been on the winning Shamrock Rovers teams for the four previous seasons!

Unhappy at Dundalk during his third season, in March 1969 he bought out his own contract and become the first professional player to sign for Bohemians, who after 80 years as an amateur club had taken the decision to go professional for the 1969-70 season. The change in the club’s articles to permit payment had not been finalised so Tony and ex-St Patrick’s Athletic keeper, Dinny Lowry, played out the season without pay.

Tony’s dividend came on the following May when Bohs captured the FAI Cup, their first major trophy in 34 years, and he scored the winning goal in a 2-1 victory over Sligo Rovers after a three game marathon. By way of a bonus he received his second International Cap in September 1970.

A year later he retired from playing but not from an active involvement in Bohemians club and its financial affairs. The managing director of clothes manufacturer Jodi, he first became involved in sponsorship in August 1972 when he supplied track suits to Bohemians for their UEFA Cup game against Cologne, leading to a major shirt sponsorship in the Jodi name.

He also became involved in team management, starting as player-manager of Leinster League team Parkvilla from Navan, and also spent a period managing the Irish Schoolboys International team. Over the following twenty years he remained involved with a number of Leinster League clubs—Tolka Rovers initially, and later Ashdown Villa, most memorably when defeating Dundalk in the FAI Cup in 1991 and repeating the feat a few weeks later against Derry City at the Brandywell.

A member of Bohemians from his playing days, he became club President in 1993. He was the major driving force in the development of Dalymount Park, which included a new stand—the Jodi Stand. By that stage he had also become involved in a successful participation with the Irish League club Crusaders, both in a management capacity and with sponsorship.

His contribution both to Bohemians and to the League of Ireland have been recognised—he has been honoured by the Bohemians members by his appointment as the club’s first Honorary Life President and in 2000 he was enrolled in the FAI’s Hall of Fame.