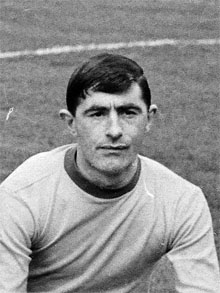 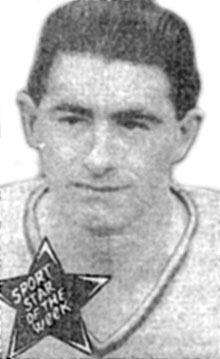 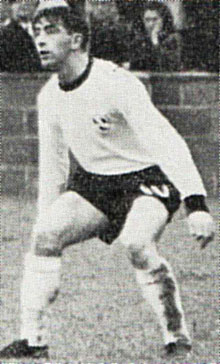 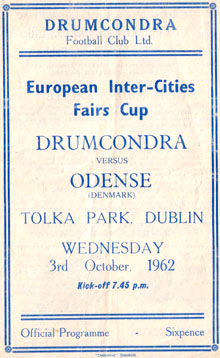 For ten seasons from 1958-59 , ex-St Brendans inside left Jimmy Morrissey was one of the playmakers of the all-powerful Drumcondra team. Making his League debut on Nov 8th 1958 against Bohemians, two League Pennants (60-61 and 64-65) were Jimmy’s major rewards during a 10-season period when he scored 43 League goals from 144 League appearances.

He was also the recipient of an FAI Cup runner up medal in 1961 when hot favourites Drums failed to land the League-Cup Double, losing 2-1 to St Patricks Athletic in the final.

A Tolka Park clear out in the summer of 1968 saw Jimmy join his old Drumcondra comrade-in-arms Tommy Rowe, now in charge at Dundalk, in a player-exchange deal with Gerry Flynn.

After four minutes of the first round Fairs Cup tie against Utrecht, Jimmy was taken back to fill the gap left by the departure of Patsy McKeown, on his way to a local hospital with his leg broken in two places. When the other full-back, Des O’Reilly, was injured and ended up limping on the wing, Jimmy was joined in the full-back line by Larry Gilmore.

Talk about make-shift!! Nonetheless Dundalk held out for a very creditable away draw and the bonus of a precious away goal.

In the second leg a couple of weeks later Jimmy provided the extra time winner in a jam-packed and delirious Oriel Park—for which he was the recipient of the Irish Independent’s Sport Star of the Week Award. He was an automatic choice for the year, missing just five games in his first season.

His second term at Oriel Park, under Liam Tuohy, was disrupted by injury.

After playing in the opening half dozen games a knee injury knocked him out and he did not return until the abandoned February FAI Cup tie against Finn Harps, where he was employed as a sweeper. After his comeback he played just five games until the end of the season and he was then released.

He spent 1970-71 back with Drumcondra before finishing his career in the Leinster League with Longford Town in 1971-72 (meeting Dundalk in the FAI Cup) and a year later with the Tony O’Connell player-managed Parkvilla from Navan.

In 1961-62 he had been capped with the League of Ireland in Inter-League games against the Football League and the Italian League.

Jimmy Morrissey, whose superb headed goal against D.O.S. Utrecht, enabled Dundalk to qualify for the second round of the Inter-Cities Fairs Cup competition. The vital score left Dundalk as Ireland's sole remaining representative in Europe this season.