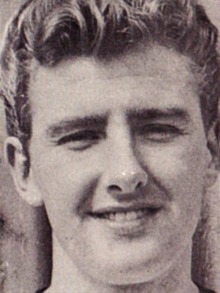 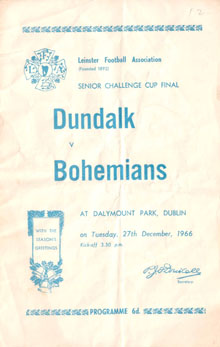 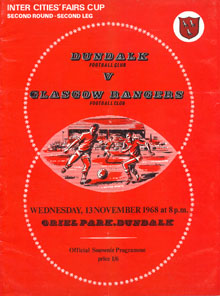 Over his 5 full seasons, playing at right half back, Dundalk supporters had no doubt as to his role in one of the club’s most successful eras and of his value as a team player when the chips were down and the battle was at its fiercest.

Mick thrived on heavy grounds and he invariably caused panic among opposition defenders when deciding to sally forward. When on song his accurate cross-field passing helped open up many defences.

Mad on football from an early age, Mick had started with the Johnville club, working his way through the age categories from under-9s onward and there were few Schoolboy football honours that did not end up on the club’s sideboard. He was a boyhood friend of Johnny Giles, who persuaded him to join the Leprechauns, managed by Giles’s father.

A later stint at the Shamrock Rovers nursery, Stella Maris, brought more trophy wins and a place at Glenmalure Park, where he played for half a season with the Hoops Reserves, before he got an offer in 1959 to go to Aston Villa. During his two seasons at Villa Park (Alfie Hale was there at the same time), the Professional Footballers Association, under Jimmy Hill, successfully took on the clubs in the battle over the maximum wage.

In the aftermath of the conflict there were many casualties as clubs tightened their belts. Mick was released by Villa and although he received a number of offers from lower division clubs, he decided to return to Ireland.

Accepting an offer from his friend Vinny Fottrell to train with Transport in order to keep fit, he was offered a contract, but after a few weeks Cork Celtic and a number of Dublin clubs moved in with improved offers and Mick opted to go to Cork.

Starting with Celtic in the 1961-62 season, he won a City Cup medal, but lost the League title to Shelbourne after a play-off and the Top Four Cup against the same opposition. Mick’s performances in his debut season earned his place on the League of Ireland team that travelled to play the Italian League in May 1962.

Signed for Dundalk by Gerry Doyle in the summer of 1965 for a fee of £750, Doyle claimed he was the most expensive player he had ever signed. He made his Dundalk debut on August 29th 1965 in a Shield game against Shelbourne and was one of the few members of that year’s squad to continue into the treble-winning 1966-67 team, scooping League, Shield and Top Four Cup honours as well as runner up spots in the City Cup and Leinster Cup.

For four seasons as defensive sweeper he provided the perfect midfield balance to his attacking partner Kevin Murray. When Liam Tuohy had a clearing out early in the 1970-71 year, Mick and Kevin both ended up with Glentoran in the Irish League.

Their signing by the Glen’s board over the manager’s head caused a rift with manager Peter McParland. In any event both players were back in the League of Ireland before the season had come to an end, playing with St Patrick’s Athletic. Mick finished his League of Ireland career with St Pats, winning a Presidents Cup medal at the opening of the 1971-72 year.

Mick’s biggest football disappointment came in November 1967 when a last minute injury caused him to pull out of the League of Ireland team due to meet the Alf Ramsey-managed English Football League team, when Mick’s opponent would have been Jimmy Greaves.

A tailor by trade, Mick developed his own clothing manufacturing operation, with an employment of 60, and which he maintained until 1998. He retains his rag-trade interests, owning a Ladies Boutique with his daughter in Dunboyne, Co Meath.

A member of the Professional Footballers Golf Society, he plays to a handicap of 15. While he has won many prizes, he still awaits his first Majors success.

“He is one of these players whose supporters are as dogmatic as his critics. The latter say he is deficient in constructive craft. But his supporters acclaim his rugged, never-say-die, ninety minutes of give and take. He puts colour into a game that is in danger of becoming anaemic through too much concentration on the chess-board moves of modern soccer” was the Dundalk Democrat’s unapologetic view on Mick Millington early in the 1966-67 season.

In his 1967 Irish Press match report of Dundalk's performance in the Oriel Park European Cup 1-0 loss to Vasas, Tom O'Shea referred to Mick's "outstanding midfield play .... he utterly confounded the Hungarians as he kept on hammering away forcing his forwards up the field."