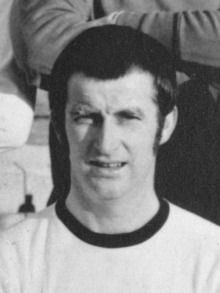 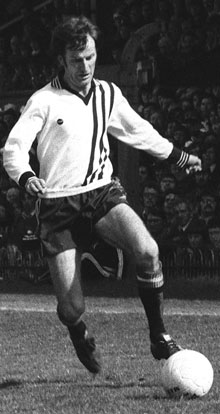 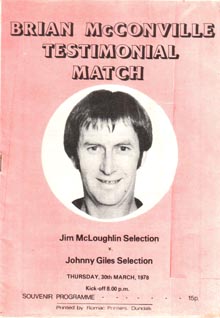 Starting with Arsenal, the most successful Minor team in the Dundalk Leagues in the late 1950s, Brian McConville developed through to their junior team and was still a minor when he played in his first Summer League final. A trial period with Blackburn Rovers did not work out—Brian was a home bird and never settled.

After further Junior League success with other local clubs, Southend United and Hearts, he was with Dundalk Reserves. Manager Shay Noonan gave him his first team debut in the second game of the 1964-65 season, a second round 2-1 Presidents Cup victory over St Patrick’s Athletic in August 1964.

Under Reserve team minder Tommy Rowe he was a member of the reserve team squad that won the Castrol Cup in the 1964-65 season. All of his appearances in his first two club seasons were as a forward, either at inside or at centre forward. At centre-forward he contributed six goals to the 9-game Castrol Cup campaign.

Like many local players he drifted away during the Fox era when the club’s emphasis was on winning trophies and the development of young local talent took a back seat. Over the next few seasons he had spells with Newry Town and Bangor, and had further Dundalk Junior League success, this time with Rangers, before getting another call to Oriel Park.

Two months into Liam Tuohy’s regime, Brian, now operating on the right side of the back four, was back on first team duty but his season ended in late December when he suffered a broken knee cartilage in an Oriel Park game against Cork Hibernians.

During Tuohy’s last two seasons in charge Brian, when available, was on every team sheet and collected winners’ medals in the Leinster Cup and Shield. The supporters honoured him with his selection as Player of the Year for 1971-72.

But he had no part to play in John Smith’s strategy for the 1973-74 season, which consisted of buying in a team of English League players.

Waterford signed him at the time that brother Tommy was at Suirside but the constant travelling proved too much and once more Brian left the senior scene, playing with and managing Queen’s Park Rangers in the local Junior League.

He was aged 32 in the summer of 1975, and all thoughts of another opportunity to play in the League of Ireland had long gone when Jim McLaughlin invited him back to Oriel Park, for a last hurrah.

Under McLaughlin he would finally receive the acclaim and the honours that was his due—a League Championship in 1975-76, an FAI Cup winners medal in the following year, two more Leinster Cup mementos and high profile friendly games against Celtic, Hibernians and Italian Champions Torino. There was even more high profile action in European competition against Eindhoven and Hadjuk Split.

Always in a very fit condition, he played in the first 32 games of the 1977-78 season but after returning home from a game at Richmond Park against St Patrick’s Athletic on January 28 1978 he died from a heart attack.

The thousands who turned out for his funeral, both from the locality and from throughout the Irish soccer community, bore testimony to his popularity. For his testimonial, a Jim McLaughlin selection was opposed to a Johnny Giles all-star team, which included Nobby Stiles, Paddy Crerand, Shay Brennan and Derek Dougan.

An Appreciation by Peter Byrne, Irish Times: “That Brian McConville, one of the most dedicated players in the League of Ireland, that he should die ‘in harness’ was almost as appropriate as it was tragic. Brian would have permitted himself a wry smile in that situation. For over a period of almost 15 years he had come to regard his association with Dundalk at the very centre of his life. His manager, Jim McLaughlin, confided that the most important single decision in Dundalk’s remarkable rags to riches story was that which took McConville out of junior football and back into the mainstream of LOI competition.”