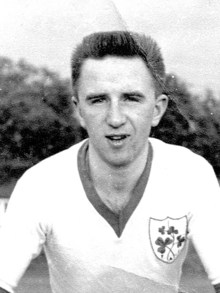 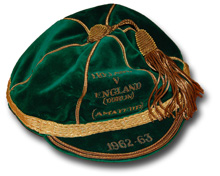 Right winger Davy McArdle’s talents stood out in his schoolboy days. A good dribbler of the ball, with plenty of pace to go with it, he loved taking on the opposing full, and was an excellent crosser of the ball.

His performances with local minor team Arsenal playing in the Dublin AUL Leagues brought him to the attention of the International Selectors and in 1959-60 he was on the Irish Youth team that played England and on the AUL Selection against Liverpool Youths.

He impressed Blackburn’s management on the strength of his displays during a trial period but he declined their offer to stay.

Only 17 when he signed for Dundalk in 1960 and 5ft 4in in height, he continued to impress and got 9 starts in his debut year. For the 1961-62 year he lost out when Willie Coleman returned to the club and for the Championship-winning 1962-63 year he competed with the November arrival of in-form Jimmy Redmond for the no. 7 shirt. But when called upon he showed his worth with two goals in three League starts.

For his last club season the competition for the wing slots had hotted up further with the arrival of Mick Dalton and Joe McGrath, adding to the available Billy Kennedy and Stan Pownall.

After four Dundalk seasons he signed for Portadown, making his Irish League debut in an Ulster Cup game against Glenavon—long-time Ports manager Ronnie McFall also made his debut that day. But a dodgy ankle shortened Davy’s Irish League experience to seven games [5 Ulster Cup; 1 Gold Cup and 1 City Cup]. His final attempt at senior football came with Drumcondra but the injury terminated his career.

He was honoured with selection to the Irish Amateur team in the company of John Murphy and Timmy Lyons for a Dalymount Park meeting with England in September 1962. Also contributing to a great Irish display in a 2-2 draw were Mick Dalton and Roy Prole.