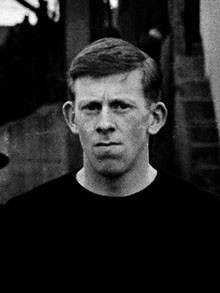 Goalkeeper Gerry Macken sharpened his net-minding skills with local Junior clubs Southend United, AOH and Rangers and in 1960 he joined the Dundalk Minor squad. After a pre-season friendly game against Ards, he made his first team competitive debut at Kilcohan Park, Waterford in an August 1961 Shield match.

During his first three seasons with Dundalk he was understudy to Christy Barron, but in this period Christy missed just one game. For his last two club seasons he and Christy vied for the number one spot.

While waiting his chance for an extended run at Oriel Park he continued in the Summer League with Rangers, helping them to a league-Cup Double in 1964.

His opportunity finally came in the 1964-65 year and his good form was rewarded when he was travelling substitute keeper on the Dublin City XI, effectively a League of Ireland team, managed by Limerick’s Ewen Fenton that travelled to Sardinia to play Italian League team Cagliari. His trophy reward was in the Presidents Cup when Dundalk had an outstanding 4-2 win over Shamrock Rovers in November 1964.

But for Gerry, and for Dundalk fans, the highlight of that season came at Oriel Park in the last game when Dundalk halted Shamrock Rovers’ gallop to the top of the league table, ensuring that the pennant would end up with Drumcondra. A series of spectacular saves from Gerry in the last 15 minutes kept Rovers at bay to the delight of Dundalk supporters and the watching Sam Prole, who was celebrating Drumcondra’s last League victory.

His continuing good form into the 1965-66 year saw him replace Barron early in the season and he was on the losing side (3-2) in the September City Cup final to Cork Hibernians. It also earned him a trial with Liverpool but he suffered two broken legs in a car accident—this effectively ended his goalkeeping career. He did attempt a comeback with Drumcondra, playing in four League games in January 1967, but to no avail.

An employee of tobacco company P J Carroll, he continued to keep goal for their works team in inter-factory competition.

In October 2006, a couple of days before his unexpected death, he was selected as Dundalk Summer League Goalkeeper of the 1960s.