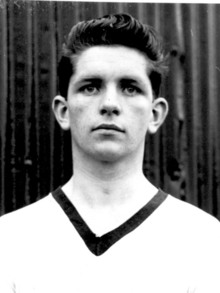 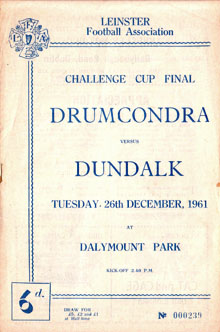 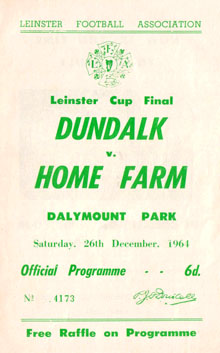 Clontarf native Tom Lyons spent his football youth at Home Farm, coming through the ranks from under 13 onwards and picking up Dublin Schoolboy League mementoes at each under age level.

He was in his 19th year when he joined Dundalk for the 1961-62 year, going straight into the Reserve team.

He was one of three brothers to play at Oriel Park. First was brother Jackie, who had Irish Amateur International experience, playing with Transport in the early 1950s and after several seasons with Glenavon had played with Dundalk in 1955-56 under Walter Rickett (7 games).

The treatment Jackie had received at Dundalk, and in particular from club secretary Joe McGrath, was the deciding factor that prompted Timmy to opt for Dundalk rather than a City club when he decided to make the move from Home Farm. Another brother Barry spent a while with Dundalk Reserves in the early 60s.

The December 1961 departure of Pat Davey for Coleraine opened the door for Tom, now rechristened Timmy by the Dundalk supporters, to take over the Dundalk centre half spot. Shay Keogh, Pat’s replacement at centre half, was Cup-tied, paving the way for Timmy to make his club debut in the final of the Leinster Senior Cup on Dec 26th 1961 against Drumcondra (1-0 loss).

For the rest of that year the last line of the 1962-63 League Championship defence was in place—Barron, Murphy, McKeown and Lyons. Barring injuries, he had first call on the number 5 shirt until his departure at the end of the 1965-66 season, which would clear the way for another Championship winning squad.

An uncompromising defender, he had excellent positional sense, had good anticipation, was very good in the air and had perfected the sliding tackle.

He managed just one goal in his 5 seasons—but it was a crucial one. In the march to the League Championship victory in the 62-63 year, he scored the equalising goal with virtually the last play of the game in a critical Oriel Park tie against closest rivals Waterford, when he was the first to reach a Francie Callan corner kick, completing a great recovery from 2 down with 10 minutes remaining and salvaging a crucial point.

The ’baby’ of the team, he had just passed his 20th birthday when he collected his Championship medal. His CV includes participation on Dundalk’s first European Cup team in 1963 against Zurich at Dalymount Park (a wrist injury knocked him out of the return leg at Zurich).

At the representative level he was honoured with three Amateur International caps, his first in a 2-2 draw at Dalymount Park against England in September 1962 with two Dundalk team-mates Davy McArdle and John Murphy.

At the end of the 1962-63 season he was a member of the Irish International squad, this time with Patsy McKeown and John Murphy, that participated in the FA Centenary Celebration Tournament, where he got two more caps against Switzerland (2-2) at Blyth and in a 2-0 defeat against Italy at Carlisle.

After five years at Oriel Park he had a couple of seasons (1966-67 and 1967-68) with Glentoran in the Irish League but his first team opportunities were limited by a serious leg injury and a powerful squad that under player-manager John Colrain delivered two successive Irish League Championships.

A 4-0 win over Ards Seconds in the 1966-67 Steel and Sons Cup final added variety to his medal collection.

Drogheda, managed by Irish International Arthur Fitzsimmons, was his next port of call, until his final League of Ireland stint with the Amby Fogarty managed Drumcondra.

Making his Drums debut in December 1970, he captained the Tolka Park outfit until his final League of Ireland game in December 1971. This was Drumcondra’s last season, making way for Home Farm-Drumcondra in 1971-72 and finally Home Farm.

For Timmy, his eleven senior seasons had come full circle since his move to Dundalk from Home Farm in 1961. [Drumcondra Dec 70 to Dec 71 League apps 26; FAI Cup 1.]

He finished his football career with a couple of seasons with Leinster Senior League club Belgrove, under the management of his brother Jackie, rounding out his memento collection with two League of Ireland B Championship medals.

He had a very successful professional career as an Industrial Engineer, initially with the Dublin Gas Company and later with Cadburys, ANCO and finishing his career as Senior Advisor with the Irish Productivity Centre.

His job brought him to many parts of the world, lecturing and participating in multi-national developments in the Industrial Training and Inclusive Change-Management Training sectors.

With a married daughter and grandchildren living in Zurich he is still a regular traveller abroad. In 2008 he made sure that his visit would coincide with EURO 08 and he availed of the opportunity to re-visit the Letzigrund Stadium, being used for the Championship, and the venue for Dundalk’s first European success almost 45 years ago. France, Italy and Romania all participated in matches scheduled for the Zurich Stadium.

Dundalk Democrat’s season review after the 1962-63 Championship victory: “Tim Lyons established himself as one of the coolest and cleverest centre-halves in the League of Ireland”.