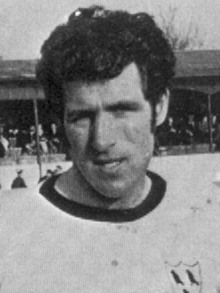 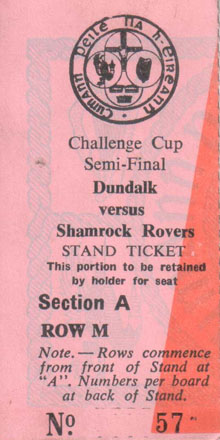 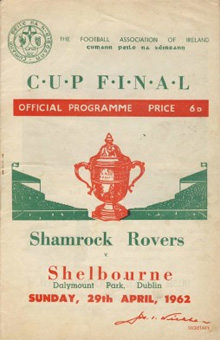 Like Eric Barber, Tony Dunne and many other League players inside forward Ben Hannigan had started with Dublin junior club St Finbars, before joining St Laurence and later East Wall. While with junior club East Wall he was spotted by Shelbourne and at 18 years of age was offered a contract for the 1961-62 season. Under Gerry Doyle’s management, Ben was an immediate hit as Shelbourne tied with Cork Celtic for the League Championship and qualified for the FAI Cup final.

But while arch rivals, Shamrock Rovers, prevailed in the Cup, a single goal by Ben in a play-off settled the League in Shelbourne’s favour. In the following season Ben made up for the Cup loss when Shels defeated Cork Hibernians in the final. During his five seasons with Shelbourne he featured in a series of high profile European games against Spanish and Portuguese opposition that included a Fairs Cup 2-1 play-off win against Beleneses, followed by two narrow 1-0 losses to Athletico Madrid.

Blessed with all the footballing skills, he had exceptional ball control, was an immaculate passer and had a healthy appetite for goal scoring. Normally deployed in a deep-playing midfield role he could hold the ball indefinitely, creating time and space for his colleagues. Describing his temperament, the Dundalk Democrat rather diplomatically reported that “he had an easily aroused disposition, often exploited by opponents”.

In December 1965 he moved to Wrexham for a £3,000 fee but never really settled with a club struggling at the foot of the Fourth Division and after making 7 League appearances he returned to Ireland at the end of the season, moving to Dundalk to join a new team in a revamped Oriel Park.

An opening 12-match unbeaten sequence under Alan Fox set the scene for a memorable season and in a forward line bursting with talent Ben contributed ten goals before the League had started. By season’s end Oriel Park was celebrating a treble of League, Shield and Top Four Cup and runner-up spots in the City Cup and Leinster Cup.

For the following season Ben decided to sample English football again and went to Southern League club Chelmsford City but by the middle of November he was back at Oriel Park and picked up where he left off. Although he played in only 29 games his 20 goals was a club season best and his two goals in the final League game of the year against Shelbourne brought his League tally to 15, sharing the League’s Best Marksman award with Carl Davenport of Cork Celtic.

His early season exploits in 1968-69 included the UEFA Cup victory over Utrecht but his involvement in the following round against Glasgow Rangers was limited to the Ibrox Park tie. Injuries disrupted his last Dundalk season and he missed the FAI Cup loss to Shamrock Rovers.

In early April 1969 the Hoops player-manager Liam Tuohy, in the midst of a serious injury crisis, signed Ben for a fee of £500. Scoring on his debut, he followed up the next weekend with a brace to keep the Hoops in sight of League leaders Waterford. Not being cup-tied he lined out in the drawn FAI Cup final against Cork Celtic, but a groin injury finally caught up with him and he was replaced by Damian Richardson for the replay when Rovers completed their record six FAI Cup wins in-a-row.

In the following years European Cup Winners Cup he again featured when he made both home goals as Rovers defeated Schalke 04 2-1 in the Dalymount tie. The next three years were spent at different clubs, Sligo Rovers, St Patrick’s Athletic and in 1972-73 he returned to Shelbourne, where he added another FAI Cup runner up medal to his collection when Cork Hibernians came out on top in the 1973 final after a replay.

After being released by Shels in November 1973, Cork Celtic manager Paul O’Donovan signed Ben following an injury to mid-fielder Bobby Tambling and he joined a star-studded cast already at Leeside that included Carl Davenport, Alfie Hale, Alex Ludsic, Frank O’Neill, etc. Come the season’s end Celtic had collected their first League Championship, while Ben was pocketing his third League winner’s medal, each with a different club.

Reflecting his contribution to that success he was the winner of the Player of the Month Award in February 1974 and in that year’s Soccer Writers Personality of the Year Award he was runner-up to the Celtic manager, Paul O’Donovan, by a margin of 1 vote. In his last full League season of 1974-75 he scored one League goal to bring his career League and Cup tally to100.

In 1981 his old club Shelbourne, stranded at the bottom of the League table and everybody’s whipping boy, appealed to 38-year-old Ben for help and he came out of retirement to play in the FAI Cup. But even in his best day he probably could not have worked the necessary miracles required by the Shel’s panel of the early 80s and after making a substitute appearance in a 4-1 Cup loss to St Patrick’s Athletic, he played in three League games, making his final bow at Tolka Park on April 5th 1981 in a 5-2 loss to Drogheda United. In his three spells with Shelbourne he had made 195 appearances and scored 89 goals.

In a period brimming with some of the League of Ireland’s great players, wherever he played Ben stood out and over his 15-year odyssey around the League he established himself as one of its most colourful and entertaining characters.

He was twice honoured by the selectors of the League of Ireland Inter-League team: in 1963 against the Irish League, while with Shelbourne, and in September 1966 against the Scottish League, during his Dundalk stint. He also featured in 1962 for a Dublin Selection against Arsenal.

His European club participation with three clubs aggregated to 14 games (Shelbourne 9, Dundalk 3 and Shamrock Rovers 2) and during a period when Irish club wins in European competitions were very much the exception, Ben’s cv recorded tie victories with Shels (Belenses) and Dundalk (Utrecht), and a win with Shamrock Rovers in the home leg against Schalke 04.