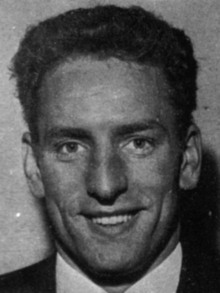 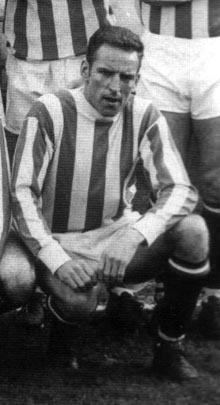 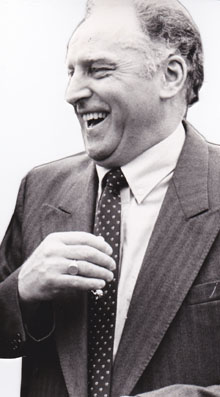 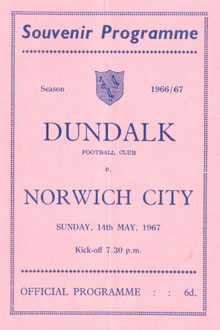 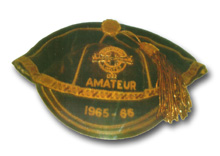 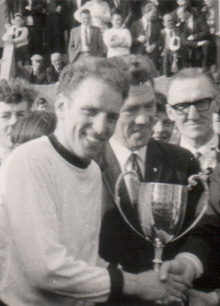 Over 13 seasons with half a dozen senior clubs Danny Hale was one of the most prolific goal scorers of the 1960s on both sides of the border. Resilient, durable, a skilful ball player, ever on the move, deceptively fast, and difficult to dispossess, he had all the attributes of the great scorers—always in the right place, superb first touch, goal poacher supreme, two-footed and inside the box the ball seemed to be drawn to him like a magnet.

Gaelic football and hurling with the Christian Brothers were Danny’s schoolboy games before spells with junior clubs St Malachys, Cranburn Stars and Lisnagarvey Strollers. Semi-permanent table proppers Cliftonville, under Norman Kernaghan, was his first Irish League club, and he had just turned 18 when scoring on his Irish League debut against Coleraine in the opening fixture of the 1959-60 year.

After two years there he moved to Glentoran during the 1961-62 season where he gave notice of his intentions when he scored on his debut. With the Glens he picked up an Intermediate Cup medal, but the form of regular centre forward Trevor Thompson, with 46 goals from 53 games, restricted Danny’s first team opportunities to 12 appearances when he scored six times.

It was no surprise that Danny ended up with Crusaders—two of his brothers had spent time at Seaview. The next four goal-filled seasons (21, 34, 28 and 55) were spent there, during which Crusaders recorded two rare trophy wins. The 1963-64 season brought the Ulster Cup when Danny’s late equaliser in the 2-2 final against Glenavon opened the way to a replay victory.

Twelve months later this was followed by the County Antrim Shield when Danny provided two goals in the final, this time in a 6-0 win over Larne. In the following term, his fourth with Crusaders and his last before coming to Dundalk , he hit his best season total ever, scoring 55 goals but was still adrift of the 63 from Linfield’s Sammy Pavis, the year’s topscorer.

Joining a brand new team in a new-look Oriel Park for the 1966-67 year, he made a racing start, finding the net in each of the four opening fixtures. This set the scene for a memorable year which, under player-manager Alan Fox, delivered three trophies—including the League Championship—and two sets of runner up medals.

In a season which set new scoring records, Danny competed for the goalscoring honours with the most lethal group of forwards ever seen in Oriel Park and his 28 hits just shaded Ben Hannigan’s 26 for the Leading Marksman Award. He and Johnny Brooks (Sligo Rovers) shared the title of Leading League Scorer with 15 hits each.

In his second season he featured in Oriel Park’s first Euro night with the visit of Vasas from Budapest, scoring in the second leg 8-1 defeat in Budapest. But the season was disrupted by an acrimonious Board-Manager dispute and Danny left in the last month of the season to join Derry City, just in time to score 3 goals at the Brandywell before the season closed.

Derry had failed to attract Danny three years previously, but their patience was rewarded when in his first of three full seasons he established a new post war club record of 45 season goals. His 21 League goals earned him the title of the Top League Scorer and the rare distinction of collecting leading League Marksman Awards on both sides of the Irish border.

He collected a runner-up medal in the 1971 Irish Cup final when Derry fell to a Martin O’Neill-inspired Distillery. By the time he left for Ards at the end of the 1970-71 year his 3-season Brandywell record read 100 goals and at this stage his previous 9-year average was over 31 goals per season. When he finished his senior career at Ards at the end of the 1971-72 year he had hoisted his career goals to over 300.

His performances brought him three Amateur International caps with Northern Ireland, all against England (1960 3-2 loss at High Wycombe, 1963 2-1 win at Belfast and finally 1965 2-0 defeat at Ballymena). His Dundalk performances in 1966-67 earned him the Supporters Club Player of the Year Award and he was in the final short list of six from which the Soccer Writers League of Ireland Personality of the Year was chosen, when the Award went to Limerick’s Al Finucane.

His biggest football disappointment came when he was with Dundalk. A lifelong Glasgow Celtic supporter, he was selected on the League of Ireland team to play the Scottish League, but a last minute injury deprived him of the opportunity to play at Parkhead. An upholsterer by trade, Danny retains his football interests through his involvement with Newington Rangers, for whom his son played and managed for many years.