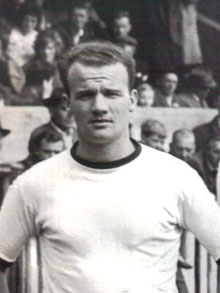 Ex-Bohemians Amateur International Mick Dalton went straight into Dundalk’s first team for the opening game in the 1963-64 season, when FAI Cup holders Shelbourne were defeated 4-3 for the Presidents Cup.

Starting at right-half in the absence of Tommy Rowe, after half a dozen games he moved to left half for the European Cup ties against Zurich, where he and Tommy provided the midfield strength for the historic first away win by an Irish club in a European tie, when Dundalk fashioned a 2-1 victory in the second leg tie. On Ted Harte’s return from injury, Mick was assigned the number 7 shirt.

Had it not been for a vintage performance from the outstanding Shamrock Rovers, who took home five trophies, Mick’s honours would have been better than League and Shield runner-up.

However, injuries kept him from participating in the last act of the season when Dundalk spoiled the Hoops near-perfect year, defeating them in the semi-final of the Top Four Cup and then getting the better of Limerick in the final.

Released at the end of the year, he later played with Sligo Rovers and Drumcondra. He joined Athlone Town in the Leinster League for the 1968-69 year and over two seasons had successes in the Castrol Cup and the Blackthorn Trophy. When Mick quit playing he stayed with the newly promoted Athlone as a trainer.

After the sudden departure of manager Billy Young in January 1970, Mick was appointed in his place and stayed until the end of the 1971-72 year, winning the Leinster Cup and reaching the final of the First Division Shield, losing to Shelbourne in a replay.

He later managed Leinster League club Dalkey United, steering them to success in the League of Ireland ‘B’ Division in 1974-75 and to an FAI Cup tie win over Limerick in 1976.

With Shelbourne he acted as trainer in 1978 when Tommy Rowe was in charge and later took on the manager’s role but resigned in the summer of 1979. At various times he managed Workmans Club, St Patricks CY Ringsend, CYM Terenure and Railway Union.