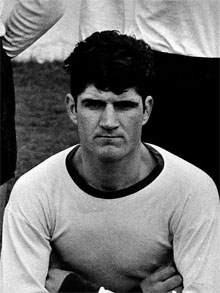 Making his debut a winning one in the opening day first round Presidents Cup clash with Drogheda, he collected a winner’s medal when Shamrock Rovers were defeated 4-2 in an early November final replay. On the following St Stephens’ Day he scored in the final of the Leinster Senior Cup but it was not sufficient—Leinster Leaguers Home Farm shocked Dundalk by 2-1.

He divided his time over his two club seasons between left full, left half and left wing in almost equal measure and finished the 1964-65 season with the reserves on the successful Castrol Cup winning team. His second season was utterly forgettable, except for the upheavals that resulted in a new board, a new club structure and ultimately a new and better future.

The 1966-67 season he spent with Portadown where he became a first team regular with 36 appearances [League 22 (4 gls); Irish Cup 2; Ulster Cup 2; City Cup 8; Gold Cup 2 (2 gls)]. A disappointing bottom third of the table year, he opened the season under Charlie Tully who departed after six consecutive league losses and the only highlight of a poor season was the post-war record 37 goals scored by Tully’s successor, Scotsman player-manager Jim Conway.

Following his single season at Shamrock Park Sammy returned to Drumcondra and after another season at Tolka [1967-68 League 21 apps; FAI Cup apps 3] he finished his career with Longford Town in the Leinster League. Ex-Dundalk Willie Roche joined him at Longford for a first round success in the 1969 FAI Cup, defeating Sligo Rovers 2-0, but they went out in the next round by the same score to Shelbourne.