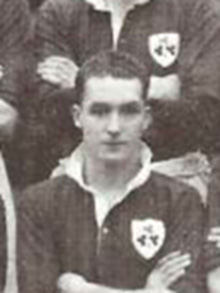 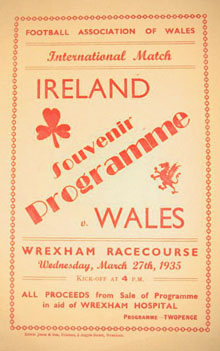 ‘Is fleet of foot…at the NCC Sports he headed the field in the 100 and 220 yards races.….on the small side but exceedingly clever…his footwork is neat and bewildering to the opposition…has rare command over the ball and can kill a lively sphere with grace and ease…’ [Ireland’s Saturday Night March 1927].

During the 1926-27 season he lined out twice with Dundalk in League games, on Nov 6 v. Bohemians, and Dec 12 v. Shelbourne. A move to Ards for the following season brought the first of four Inter-League Caps. A successful trial with Second Division Hull City led to his transfer in June 1929 and although Hull were relegated in his first season his performances earned him his first International cap in Sept 1931.

His sixth and final Irish cap came at Hibernians (1935-36). Spells with Goole Town (whom he captained in 1936-37 to the Yorkshire League title) and Altrincham (1937-38, Cheshire County League) preceded his last English League involvement, when he was with Aldershot in the last pre-war year of 1938-39. During the 1940-41 War-time North Regional League he lineout in a number of games with Hull City.