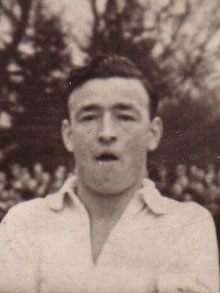 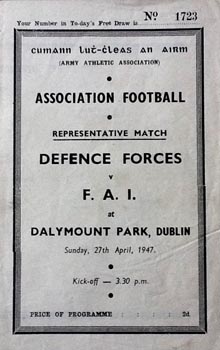 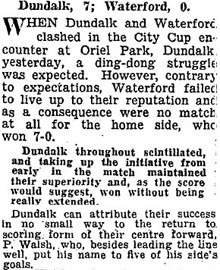 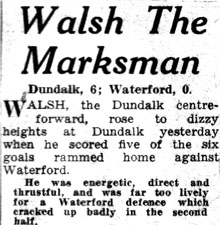 A bustling centre forward, who was equally at home on the right wing, Peadar Walsh spent the 1943-44 year with Shelbourne Reserves in the Leinster Senior League and scored in the Reds 5-2 victory in the play-off over Jacobs after the league had been tied. He was called upon once for first team duty in an October 1943 Leinster Cup tie against Shamrock Rovers.

He later came to prominence with the 44th Battallion LDF team, but it was his goal scoring feats for Leinster League club Grangegorman that brought him to the attention of Dundalk. Before coming to Oriel Park in September 1946, he had scored 15 goals in his last four games with Grangegorman, which included 6 against Dundalk Reserves.

He made his debut immediately after signing, scoring against Shelbourne in a Dublin City Cup match away from home, lost 4-3. On the following weekend, in the opening Shield game, he netted his first club hat-trick in a 3-0 Oriel Park victory over Shamrock Rovers.

By the time he left Dundalk at the end of the 1948-49 season, his name was on 71 goals and on ten occasions had hit three or more in a match.

A very popular player, he was twice the club’s leading scorer, and he also set a competition record for the Dublin City Cup when hitting five against Waterford in August 1947 at home—a feat he repeated a year later against the same opposition, also at Oriel Park and in the City Cup!

He was in red-hot form at the beginning of the 1948-49 season, scoring 19 goals in an 11-match stretch in September and October, only failing to register a score in two of the matches. However, a barren spell for Peadar, and for the club, led to changes and he found himself on the right wing supplying a stream of crosses for newly converted centre forward Ronnie Henderson. Their combination was the key to the winning of the FAI Cup and to procuring runner up medals in the Inter City Cup.

Although he failed to score in the FAI Cup he played a key roll in all 11 Campaign goals, thanks to his pin-point crossing and accurate passing. He supplied the crosses for all three goals in the Cup final victory over Shelbourne, when his mastery of the full-back and his quick and accurate crosses caused panic among the defenders.

His hat-trick against Distillery in the Inter City Cup in early May brought his season strikes to 30 goals, and earned him the title of the leading League of Ireland goalscorer in all competitions. In the previous season he had been pipped to that honour by Shamrock Rovers centre-forward Podge Gregg, thanks mainly to Gregg’s 8-goal haul in the FAI Cup.

Peadar’s last club game was in the final of the Inter City Cup against Shamrock Rovers, lost by 3-0 at Dalymount Park. He was one of the casualties of the financial disaster that flowed from the ‘Scottish’ team’s successful year: by the time the following season had opened he was with Luton Town, where he scored two goals in eight English League appearances.

A year later he was transferred to Brighton and Hove Albion, but failed to break into the first team. He afterwards played with Hastings United in the Southern League and with Holyhead Town in the Welsh League.

In early May 1947, shortly after scoring four goals against Waterford in a delayed City Cup fixture, he received his first representative honour, when he was on the Irish Army team on the annual fixture with the FAI XI. His performance earned his place on the FAI Selection that played an RAF XI the following week at Dalymount Park, contributing a goal to a 3-1 home win.

During his three seasons with Dundalk he had an extraordinary scoring record at Oriel Park against Waterford, scoring 19 goals in half a dozen encounters and on five of these occasions he recorded three or more goals.

Popular…jolly…always smiling…and an outstanding striker…these were the terms most widely used by those who played with him and saw him play. Certainly his 57 goals in his last two club seasons from 67 appearances is a strike rate that ranks amongst the very best to represent the club.

Only Eddie Carroll (11) betters Peadar’s 10 club hat-tricks and at Oriel Park he has scored more hat-tricks (7) than any other player.

The Democrat got very excited after Peadar scored a hat-trick in his second match, and did it against Shamrock Rovers: “…got through a lot of hard work … active … eager …a flair for finding the net … if he can keep up this form he’ll be the best centre forward we had since Alf Rigby.”