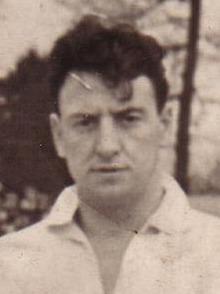 Born in Scotland of Galway parents, Mick’s junior career started with St Roch’s Junior FC, based in Provanmill, Glasgow. He was centre half with Alloa in the 1946-47 season, with 27 first team appearances, only missing 4 games in the Scottish B Division. At Bury at the beginning of the 1947-48 year, he had to be content with reserve team football and in January 1948 he moved to Rochdale, having one League appearance before he got the call from Ned Weir to head for Dundalk.

With another centre-half Ronnie Henderson also on board, Mick was given the no. 2 shirt, playing alongside debutant Johnny Fearon, and before the end of September he was in possession of a Dublin City Cup Winner’s medals, thanks to an unbeaten 9-match campaign.

A run of team injuries disrupted progress during the Shield campaign—Mick’s kept him on the sideline for seven matches. He returned for the League but a poor opening resulted in significant changes—Ronnie Henderson was dropped to the reserves, Johnny Fearon restored to right full and Mick went to centre half. When the rejuvenated Henderson returned to first team duty at centre forward a few weeks later, the central spine of the 1949 FAI Cup winning team was in place.

Mick became the dominant defensive figure as the team swept to the top of the League table and marched to ultimate Cup glory against Shelbourne in the final where his coolness under pressure and marshalling of the defence kept a lively Shel's forward line in check. To complete his season he played centre half on the League of Ireland team that lost 5-0 to the English League at Dalymount Park in early May, when Roy Bentley and Len Shackleton each contributed two goals.

A crowded season end that included friendly games against Everton and St Mirren scuppered League hopes and runner up medals were lost on goal average after a last day home draw against basement Bohemians. Finally, in the last match of the season, he collected a runner up honour in the Inter-City Cup after Shamrock Rovers got the better of a leg-weary Dundalk, who were completing a 6-games-in-14-days programme.

The sensational news a few weeks after the season had ended that the club was in deep financial trouble and that the Cup team was to be broken up, led to anguished cries from the supporters and demands that some of the team be retained in order to build a new squad around the ‘old hands’. Such was Mick’s popularity that he was singled out in this regard. The Committee had other ideas and the price put on Mick’s head was £250.

By October he was with Leyton Orient and made his debut in January 1950, but could not command a regular first team spot, making 5 League appearances before a summer move to Gillingham. It was a similar story there as well, and at the end of the 1950-51 season, after 8 League appearances, he departed for Brentford, where he failed to make a first team breakthrough and where he finished his career in 1951, being forced to retire after mistreatment for a leg injury.

One of Mick’s best friend was Leicester City keeper Ian McGraw, with whom he spent his annual holidays in Galway, and before the 1949 FA and FAI Cup finals they were both looking forward to a two-medal celebration. However, due to a broken finger that was later amputated, Ian did not make the starting line-up when Leicester lost 3-1 to Wolverhampton Wanderers in that year’s Wembley FA Final.