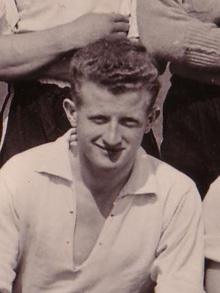 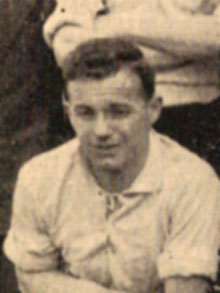 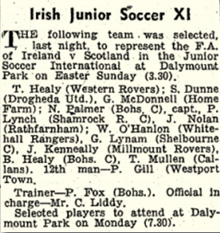 Gaelic football at O’Connell’s School followed by Leinster League football for a couple of seasons with Skerries United and Whitehall Rangers, prompted the 20-year old Willie O’Hanlon to write to Dundalk secretary Sam Prole seeking a trial. The upshot was that Willie made his club debut in the opening game of the 1949-50 season.

Willie had completed his junior football days on Easter Sunday 1949 when he was capped for the junior International game against Scotland at Dalymount Park where an attendance of 15,000 saw a Scots 3-1 victory. Willie was selected at right wing and the captain and right half was a future Dundalk teammate, Noel Palmer.

The departure of most of Dundalk’s 1949 FAI Cup-winning team within weeks of the end of the season, meant a virtually new lineout for the following term. Right half-back Willie was one of seven players who made their club debut in the opening fixture of the 1949-50 season playing against the previous year’s League Champions, Drumcondra, for a 2-1 defeat in the President’s Cup.

With club legend Joe Ralph nailing down Willie’s favourite right fullback slot, his first team duty when called upon was mainly at right-half although his 1950-51 games saw him at inside right, from where he scored twice in a 3-game spell.

He made an appearance in another President’s Cup final, this time in the 1952-53 replay, when St Patrick’s Athletic gave Dundalk a 5-0 spanking, thanks mainly to Irish International Shay Gibbons’ hat-trick.

For most of his six club seasons, Willie played with the reserves, and when he left Oriel Park at the end of the 1954-55 season he had clocked up more than 150 games between the first team and the reserves.

He went back to playing in the Leinster Leagues, initially with Portrane Athletic (1955-56) and then with Whitehall Rangers (1956-1962), with whom he remained a committee member for many years.

After a period as a trainee accountant, he was employed for most of his working life in the wholesale carpet distribution business. A fine runner in his youth, collecting a silver medal in the National School’s Athletic Championships over 800 metres, he kept fit by running through the sand dunes of Dollymount.

He still winces when recalling the time that he broke his nose playing against Sligo Rovers. His keeper Eamon Darcy accidentally threw a water bottle in his direction and belatedly shouted “duck” but it was too late—Willie took the full frontal blow. Trainer Gerry McCourt gave him a cold sponge and told him to play on. When told afterwards that he had a broken nose, he duly fainted!!

Paid the princely sum of £2 per week with bonus payments of £1 for a win and 10shillings for a draw, these still exceeded his trainee accountant’s wage of 30 shillings. The club paid his train ticket cost and his travelling companions to Oriel Park included Eamon Darcy, Bobby Kane and Leo McDonagh.

He was one of the old gang who came to Oriel Park in 1991 to celebrate the club’s 1500th league game.