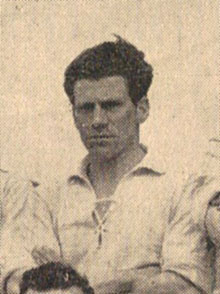 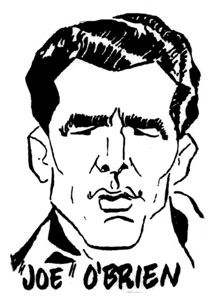 The 22-year-old Dublin-born Joe O’Brien had a couple of seasons with Shelbourne under his belt before transferring to Oriel Park for a £10 fee. Competing with Shel’s legend Gerry Malone for the left-wing berth limited his first team appearances to 9 League games (scoring four goals) and 3 Leinster Cup games.

He faced a similar problem at Dundalk with Northern Ireland International Jimmy Kelly in possession of the no. 11 shirt. Joe, who was a natural left-winger, started at inside left but during the League campaign he filled every forward slot.

His excellent form did not go unnoticed and earned his selection for the Irish junior team against Scotland but he was forced to cry off. He closed his season with a brilliant hat-trick for the Leinster League team against the visiting Lanarkshire FA XI at Dalymount Park in a 4-1 victory.

With Kelly’s departure at the end of the season Joe switched to the left wing for the 1947-48 year when he got the opportunity to show his speed and strength. Coupled with Eddie Hamilton at inside left, Peadar Walsh thrived on the service supplied from his left flank, and there were 25 goals in the 7-match City Cup, which secured the runner up spot behind Shamrock Rovers.

The scouts were taking note and within another half a dozen games the first offer arrived from Wolverhampton Wanderers. Second Division Luton Town moved in with an improved bid and by mid-November Joe was on his way to Kenilworth Road, becoming the first of four members of the club squad to be transferred this season to English League clubs. He would be followed by Jimmy McEvoy, Tommy Clinton and Jimmy Hartnett.

Joe made his Luton debut within a month of his arrival, celebrating with a 2-1 home win. In a run of eight matches he scored three goals, one in a 6-1 defeat of Leeds United where he had a hand in all six goals. But in the following season he failed to nail down a regular place and after a total of 11 League starts (scoring 3 goals) he was transferred in June 1949 to Third Division (South) Ipswich Town.

After scoring on his Ipswich debut against Bournemouth on the opening day of the season, he became much busier at Portman Road and his 11 League goals from 41 starts in his first season put him in a respectable second spot in the club’s goalscoring list, only two behind the leader. He opened the following season as first choice number 11, but lost his place and returned to Ireland. Over two seasons with Ipswich Town he clocked up 50 League games, knocking in 12 goals.

He returned to Dundalk for the FAI Cup-winning 1951-52 season and competed all season long with Fergus Moloney for the left wing spot, playing 23 games against 24 for Fergus. But for the FAI Cup matches he lost out, being one of a number who paid the price for four successive League losses immediately before the first round Cup match.

After a spell with Longford Town in the Leinster Senior League he returned to League of Ireland action with St Patrick’s Athletic halfway through the 1953-54 season, where he again missed out on an FAI Cup winner’s medal when Drumcondra beat the Inchicore men by 1-0 in the final. He returned to Longford, helping them to the final of the Leinster Cup, (defeating Dundalk in the semi-final), where they lost to Shamrock Rovers.

Joe finished his career with a number of seasons at Transport, on two occasions finishing at second spot in their leading League scoring list. He has a permanent place in the records of the defunct Transport—his 4 goals against Limerick in March 1957 leaves him joint holder of its highest individual scorer in a League match.

He later managed Transport to many successes, including the Division 1 of the Leinster League in 1962-63 with an unbeaten record and had the distinction of leading them to seven successive Metropolitan Cup finals between 1964 and 1970, winning three times.

“O’Brien has ‘taken the light out of our eyes’ for the past few Sundays. He sparkled in impossible ground conditions … his speed and pace was terrific … and he got the ball in well to his centre-forward. We blame the committee for a lot, but if O’Brien keeps up this form he will have justified their persistence with him despite poor previous form.” The Democrat late in Joe’s first season at Oriel Park.