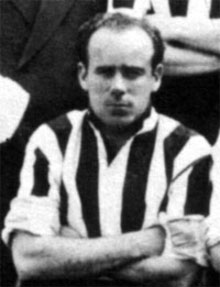 Right-winger Jim McStey, with a Northern Ireland junior cap, had spells with Newry Town and Limerick before Dundalk signed him from Ballymena in November 1947. He became an ever-present for the rest of the season as Dundalk, after a dreadful League opening, all but caught pace-setters Drumcondra, finally losing out by a point for the Championship.

Regularly credited in match reports as the club’s best forward, his good form during the club’s League drive secured his selection, along with team mates Johnny Matthews, Peadar Walsh and Johnny Walsh, to the League of Ireland team to play the English League in April 1948.

An impressive display at the Preston showcase was his passport to the English League and in July 1948 he was transferred to Grimsby Town. He was the fifth Dundalk player to head across the Channel from the 1947-48 crop, following Joe O’Brien (Luton), Jimmy McEvoy (Wolverhampton), Tommy Clinton (Everton) and Jimmy Hartnett (Middlesboro). He was 26 years old when he made his English League debut in August 1948.

Small (5ft 6ins) and sturdy, he was equally adept on the left wing and over the following three seasons he made 61 Division Two League appearances. He only scored 2 goals, but at this time the role of the winger was to cross the ball accurately to the goalscoring centre-forward and during his first two Grimsby seasons he serviced Tommy Briggs to 26 goals in 1948-49 and 36 in the following year.

However an alarming decrease in Briggs’s productivity during 1950-51, and his sale in December, led to demotion to Division Three and Jimmy moved on, missing the opportunity to serve under Bill Shankly who became Grimsby’s manager during the summer.

For the following season he opened with Boston United ( scoring 11 goals in 16 appearances in the Midlands League, which included a second-half hat-trick in an FA Cup match) and finished the year with Hastings United in the Southern League.

From the Grimsby web site on the news of Jimmy’s death: “Today as we look to the glorious past of Blundell Park, there’ll be many who remember the silky skills of the genial Irishman as he tricked his way down the wing to cross an inch perfect ball to the head or feet of Tommy Briggs, and a split second later, the bulging net.

Thanks for the memories Jimmy!.