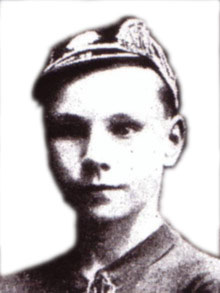 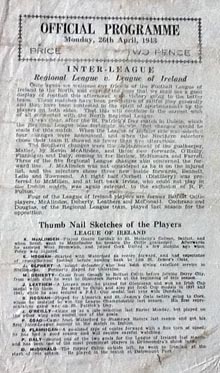 The departure of Sam McCartney from the FAI-Inter City Cups Double winning squad left a gap on the left wing. A half a dozen games into the 1942-43 season his replacement Don McDonald arrived.

With Irish League experience at Distillery and Belfast Celtic, he had been capped as a Schoolboy on the same team with Johnny Lavery, and they struck up a very effective and productive relationship on the left flank.

Don arrived in time to play in the late September Dublin City Cup final against Drumcondra, when he added a goal to Paddy Barlow’s hat trick to secure the club’s second City Cup victory.

He continued to score and his goals haul gave him the club top scorer award for both League (12) and for all games (17), when the club just failed by a point to land the League championship. At the end of the season he departed, playing with Linfield for the following season and was replaced on the left wing by the returning Sam McCartney.

The recipient of four Schoolboy International Caps, he showed his artistry with Strand PE School team and Athenville in the Juvenile Leagues. A two-footed player he could line out comfortably on either wing and he had made his senior debut with Distillery early in the 1936-37 year.

In his debut Irish League season with Distillery, while still only 17 years-old, Ireland’s Saturday Night was very positive about his future ‘His manipulation of the ball on the line is a treat….his ability to turn opportunities to account lift him above the ordinary…few young players have a better record in the matter of goal-getting…he should develop into one of the best wingman in Irish football.’