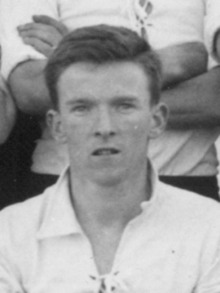 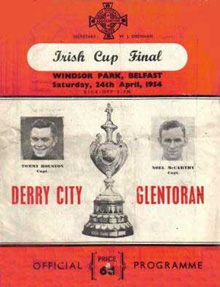 From Albert Street in the Falls Road area of Belfast, George Toner was the junior member of a seven-man group of Belfast players who travelled together to the Brandywell by train during the 1953-54 season. Come the season end all seven had Irish Cup medals.

A week after making his Senior debut, inside-forward George found himself the surprise choice to play in the 2nd round IFA Cup tie against Bangor, with Jimmy Delaney masterminding the Derry City efforts from inside-right.

A couple of weeks later he was the proud and unexpected possessor of an IFA Cup medal after Derry despatched Linfield in the semi-final—George scored the first goal in the replay—and Glentoran in the final in a second replay.

While Jimmy Delaney, who had pocketed English (Manchester Utd.), Scottish (Glasgow Celtic) and IFA Cup medals, would fail to complete the set when in 1956 he was on the losing Cork Athletic team, George went on to complete the Double—Irish Cup and FAI Cup winners’ medals—with Dundalk.

He made his Dundalk debut in a 2-0 Shield loss to Drumcondra at Oriel Park on Sept. 15th 1957 playing at inside-left.

A clever player who was good on the ball and had excellent vision, he was switched to inside right after Francie Callan’s transfer to Doncaster, but was switched back again on the New Year arrival of Hughie Gannon, where he stayed when unfancied Dundalk took the FAI Cup, defeating Cup specialists Shamrock Rovers in the final.

Although Hughie Gannon took all the Cup-scoring honours, George was the leading season marksman at both the level of League (8) and All Games (12).

Shay Gibbons took over the goal-scoring duties for the following year. An ever-present for the first half of the season, injuries and a loss of form saw George replaced in the New Year by John Murphy.

He later went to USA where he played with an ethnic German team.