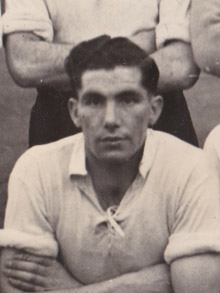 Ex-Bohemians and holder of Youth and Amateur International caps Francis O’Reilly made his club debut in the opening match of the 1950-51 season, for a Dublin City Cup game at home to Drumcondra, on 20th August 1950. With Joe Ralph as his right-fullback partner, most of Fran’s appearances were at left-full, switching to the other flank to accommodate a number of partners, Tommy Traynor, Jimmy Field and Johnny Fearon.

At the end of the season he was a member of the panel who travelled to participate in the 5-game Festival of Britain. He played with Transport after his single Dundalk season and afterwards became a successful Cabaret artist in the Dublin area.