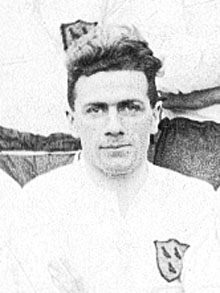 On Saturday April 20th 1929, Ireland played its fourth International game, and its first at Dalymount Park, defeating Belgium by 4-0 in a friendly game and recording the first home International victory. At outside left Bob Egan, in his debut senior season, became the first Dundalk player to earn International selection.

Born in Tipperary, he had been spotted playing in a junior game by Dundalk manager Joe McCleery who promptly signed him. His Dundalk debut was in a League game against Brideville at the end of November 1928 and he became an ever present for the remainder of the season.

“Go-ahead in his methods and a strong shot” according to the Dundalk Democrat, his nine goal haul was second only to Eddie Carroll’s 37. Robert and Eddie Carroll left at the end of the season, linking up again the following year in the colours of Newry Town.