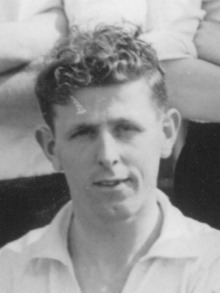 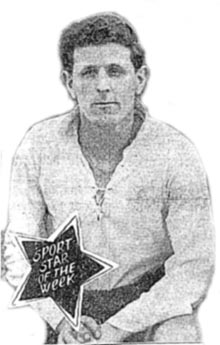 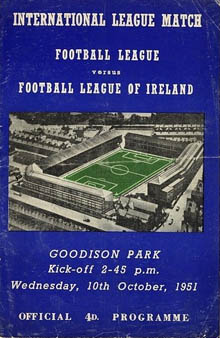 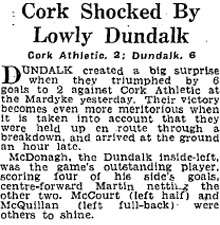 Over a period of 12 seasons and nearly 400 games, Leo McDonagh became a Dundalk legend—he helped light up the dreary 50s with his scintillating play, first as a goal-scoring right winger and for the second half of his career as a crafty and intelligent right halfback.

From Dublin junior club CYMS Ringsend, he joined Dundalk on the recommendation of well known scout Billy Behan, making his Dundalk debut on the Reserve team against Shamrock Rovers Reserves in November 1950.

By Dec 17th he had made his first team debut—scoring in a 3-3 draw with Bohemians—and by St Stephen’s Day had possession of a Leinster Senior Cup medal after Dundalk had defeated St Patrick’s Athletic in the final, winning the oldest League of Ireland trophy for the first time.

In only his third first team game his last minute winner earned his selection as the Irish Independent’s Sport Star of the Week.

Over 11 years later he played his last game against Glenavon in the North-South Cup on the 24th April 1962.

Twice winner of an FAI Cup winner’s medal, he set a club record by recording scores in each of his 12 seasons. His outstanding right flank partnership with Johnny Fearon and Paddy Gavin, chipping in three goals for good measure, made a major contribution to the 1952 FAI Cup victory. He scored the winning goal in the 3-2 opening round win against St Patrick’s Athletic, while his two goals in the famous Milltown semi-final replay against Waterford—with victory going to Dundalk in a 6-4 extra-time thriller—were crucial.

For the 1958 Cup success he was at right halfback, pulling the strings in a great halfback line with Johnny Robinson and Shay Noonan.

Only he and Joe Ralph featured in both the ‘52 and ’58 FAI Cup wins. In April 1955 he equalled the club record for most goals scored in a League game when he hit 4 against Cork Athletic at the Mardyke.

A right-winger for the first of his three League of Ireland appearances was in an embarrassing 9-1 defeat in 1951 to the English League. The last was on St Patrick’s Day 1959 at Dalymount Park against the same opposition saw him at right-half back when before a crowd of 35,000 the home side held out heroically for a scoreless draw thanks to an outstanding defensive display—Johnny Haynes was Leo’s opposite number.

Ten years after his first competition success in the Leinster Cup on St Stephen’s Day 1950, he repeated the dose on St Stephen’s Day 1960, this time against Drumcondra. He and Pat Davey were the Dundalk defensive heroes that day, holding out until Jimmy Hasty scored a late winner. He appeared in eight competition cup finals with Dundalk—five of which involved Drumcondra, against whom he had two wins, the Presidents Cup (1951-52) and Leinster Cup (1960-61).

Leo finished his playing career with Transport in the Leinster Senior League under the management of ex-Dundalk Joe O’Brien. His last League of Ireland stint was with Drogheda in their second senior season, 1964-65, helping them to their first ever win against Dundalk in a 3-1 City Cup victory at Lourdes Stadium in August 1964. But his stay lasted only a couple of months and by Cup time he was back with Transport.

He later coached the Ringsend Cambridge Boys club in the Dublin Schoolboy Leagues, nursing future League of Ireland stars Rocky O’Brien and Jody Byrne. He worked all his adult life, until retirement, with the Massey-Ferguson Company in Lower Baggot Street.

The leading soccer writer of that period, W P Murphy, in his Irish Independent match report described McDonagh’s display in the final against Shamrock Rovers in the 1958 FAI Cup final as ‘one of the outstanding displays of the final…a tremendous worker in defence…put Rover’s wing halves in the shade…lent real strength in the attack by his accurate placing of the ball.’

Dec 29 1950…”Capped a great display by scoring the last-minute winner in the Leinster Cup final.”

Dec 13th 1957 … “Gave an outstanding performance for Dundalk in his side’s unexpected victory over Shamrock Rovers at Oriel Park”.