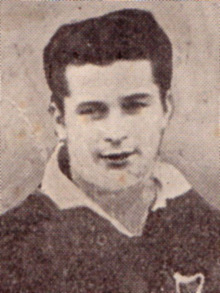 After a hat-trick on his League of Ireland debut, the 18-year old Donal Flanagan established his goal scoring credentials in the 1942-43 season with St James’s Gate. He was their leading League marksman with 11 goals and scored two goals in each leg of the FAI Cup tie matches against Dundalk which finished 5-5 on aggregate, Dundalk squeezing through by 2-1 in the play-off.

In the summer of 1943 he proved himself the fastest man in Ireland, when he made a clean sweep of all the National sprint titles, over 60, 100 and 220 yards and was second to his brother Brendan in the 440 yards.

An amateur, who also played rugby with Bective Rangers, he was expected to play with Bohemians in the 1943-44 year, but the Amateurs insistence on Saturday games did not suit Flanagan and Dundalk got him.

In August 1943 he made his Dundalk debut in the President’s Cup, scoring twice in a 3-2 Milltown loss to Shamrock Rovers. A week later another brace marked his Oriel Park debut in a 3-0 win over his old club, St James’s Gate and he went one further on the following weekend with a hat trick against Drumcondra.

After 13 games, immediately preceding the League, he had 21 goals against his name but on the heavy winter grounds he lost his touch, only coming right at Cup time, when his hat trick against Cork United at Oriel Park set up Dundalk for a 5-2 aggregate win. He finished the season with 28 goals to lead the club’s goal scorer’s list.

6ft tall and a shade over 13st., he had the ideal goalscorer’s combination of speed, a deadly shot and a match for the best defenders in the air. He was appointed captain of the Irish team that played the Irish Army in an end of season exhibition match.

The 1944-45 season saw him again at the top of the club’s goal chart, boosted by another 4 FAI Cup goals, but two mediocre club seasons brought little honours, which was limited to a runner-up medal, earned in the Presidents Cup on his club debut game.

An early season injury and a post-Christmas cartilage operation knocked him out for the 1945-46 year. By the end of November 1946 his season had been restricted to 5 games before he was transferred to Notts County as an amateur.

After scoring in each of his 2 English League appearances, the Notts management offered him maximum terms to sign as a professional but he declined, returning within weeks to Shelbourne. Shortly afterwards he was signed by Manchester City.

Without making a first team appearance for City he was at Bradford City for the 1947-48 year, scoring on his Christmas Day debut and finishing the season with 6 goals from 13 League appearances.

In 1950 Shelbourne’s manager, Irish International Charley Turner, sued Shelbourne for £300, being commissions on transfers. In court evidence it was stated that Flanagan’s transfer fee for his move to Manchester City was £2,000, of which the player received £1,000.

Reporting on Dundalk’s 8-4 Shield victory over Limerick, when all five forwards scored, the Democrat selected Donal Flanagan for special mention: “… has improved out of all recognition in the past month … at his very best …was fit, fast and deadly in shooting … his leadership and quick tackling upset the Limerick defence … “